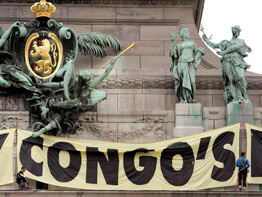 Rain came like clockwork each year right after Easter, so farmers planted their first seeds no more than two weeks after the holy day.

“The black bean was one of the first crops to be planted, as its leaves served as an important stopgap food for the many households whose granaries would have run empty by this time of the year,” Pul recently wrote in an e-mail to Dennis Fisher, education program officer for the Northeast regional office of Catholic Relief Services, the U.S. bishops’ overseas relief and development agency.

The rainfall was so consistent that “by the time Ascension was celebrated, the hungry would be fed with the bean leaves. By the third week of June, the bean crop itself was taken in to boost household food security,” wrote Pul, director of CRS’ West Africa regional office.

But farmers in Ghana no longer refer to the “feast of the bean leaf,” said Pul. The rains have become erratic in recent years, affecting the traditional planting season, and he believes the disruption is caused by global climate change.

Long periods of drought punctuated by heavy downpours and flash floods have made it impossible for people to plant soon after Easter and expect a harvest by the feast of the Ascension, he said.

Ghana’s bean farmers are not the only ones to feel the effects of global climate change.

CRS staff in Bangladesh, Afghanistan, Zimbabwe, Niger and Nicaragua also have witnessed changes in their local weather patterns, Fisher said. Severe flooding in Bangladesh has left many people homeless, while farmers in the other areas are now dealing with warmer winters and increased drought, flooding and food insecurity.

Poor and impoverished people will inevitably have a harder time adapting to new weather patterns than will their more affluent counterparts, according to Bishop Thomas G. Wenski of Orlando, Fla., chairman of the U.S. Conference of Catholic Bishops’ Committee on International Policy.
“The poor by the very definition of poverty have inadequate resources to address many problems, including climate change. They often live in the flood or drought plains (and) depend upon natural resources for sustenance,” Bishop Wenski told the Catholic Courier, newspaper of the Rochester Diocese.

“An easy example is New Orleans. While no one can say (Hurricane) Katrina was caused directly by climate change, one can easily see that the poor were disproportionately affected,” he said. “This is usually the case in most of these natural disasters.”

Poor people have fewer resources to deal with life’s challenges to begin with and do not need more hurdles to jump, noted Kathy Dubel, justice and peace coordinator for Catholic Charities of Chemung and Schuyler counties in the Rochester Diocese.

The issue of global climate change has been on the Catholic Church’s radar since at least 1990, Dubel noted, when Pope John Paul II mentioned it in his World Day of Peace message, titled “The Ecological Crisis: A Common Responsibility.”

“That was what I think got us moving in the United States and around the world, looking more closely at environmental issues and Catholic social teaching,” she said.

Elsewhere in the country global warming was to be the topic of April 14 events in Columbus, Ohio, and San Francisco.

More than 150 Catholics in delegations from Ohio’s six Catholic dioceses were expected to attend the daylong event in Columbus and its series of conversations as well as presentations from leaders in the fields of science, energy, education, business, theology, government, agriculture, health care, human services and environmental protection.

The relationship of climate change with Catholic social teaching was one of the key issues to be discussed. An address by Archbishop Celestino Migliore, papal nuncio to the United Nations, was also scheduled.
The conference will allow delegates and church officials to “listen and learn” about the complexities climate change presents to society, according to Dan Misleh of the Washington-based Catholic Coalition on Climate Change. He spoke to the Catholic Universe Bulletin, newspaper of the Cleveland Diocese, in advance of the event.

Ohio was chosen for one of a series of such gatherings nationwide because of its political importance as a swing state in elections and its critical position in the national economy with its heavy industrial base and vast farmlands.

In San Francisco, a national summit was to take place at Grace Episcopal Cathedral, with George Wesolek, director of the Office of Public Affairs and Social Concerns for the Archdiocese of San Francisco, representing the archdiocese.

“The condition of our earth, the home for our children and grandchildren and their children’s children, is more and more in our hands,” Wesolek told Catholic San Francisco, the archdiocesan newspaper. “We must learn to treat it with care. The environment is a justice issue.”

Contributing to this story were Dennis Sadowski in Cleveland and Dan Morris-Young in San Francisco.