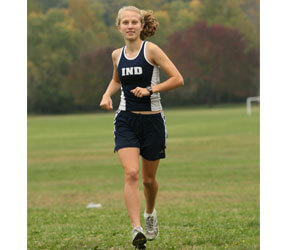 Institute of Notre Dame senior Julie Gessler has been in love with running since middle school, when she joined the Howard County Junior Striders.

She had never been in an organized sport, but was bitten by the running bug.

“I really like running, the exercise in general and the sport of cross country,” said the parishioner of the Church of the Resurrection in Ellicott City. “Everyone’s really supportive. It’s a team sport and individual sport at the same time.”

Her passion has benefited IND’s running program, which moved up to the Interscholastic Athletic Association of Maryland A Conference despite having just eight members on the team.

Gessler set a personal and course record on St. Mary’s new layout with a recent clocking of 19 minutes, 34 seconds for 5 kilometers (3.1 miles). She also posted wins against Mercy and Notre Dame Prep. She was hoping to make similar waves Oct. 27, at the IAAM championships at Oregon Ridge.

IND’s move up to the A Conference has pushed Gessler, who said, “I feel like there are more people in the meets pushing me. I’ve been racing harder.”

Both her parents, Robert and Peggy, are doctors who give to IND. Peggy teaches at the school, and Robert is an assistant coach in cross country.

Like her parents, Gessler is interested in the sciences, as she would like to major in biochemistry, at a school such as Haverford College in Philadelphia or Baltimore’s The Johns Hopkins University. She researched the chemistry of food for a school project.

“Sports has really helped me with time management,” Gessler said. “It’s given me balance.”

She is one of four Gessler daughters to attend the all-girls school. Older sister Katie graduated in 2009, and sisters Amy and Becky are sophomores.

A member of the school’s Ambassadors Program, Gessler tells potential students about the wonders of Baltimore City’s IND.

“I usually tell them that everyone’s really welcoming and that it’s such a nice community,” Gessler said.