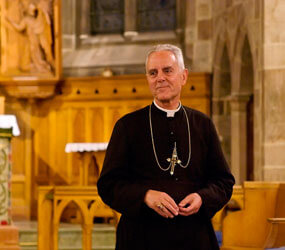 BERLIN – A German appeals court has upheld the conviction of a traditionalist bishop for denying the Holocaust.

On July 11, the court ruled against British Bishop Richard Williamson, a member of the Society of St. Pius X, who in a 2009 TV interview said that the Holocaust was exaggerated and that no Jews died in Nazi gas chambers.

The interview was aired by a Swedish TV network the same day the Vatican announced that Pope Benedict XVI had lifted the excommunication of Bishop Williamson and three other of the society’s bishops in an effort to reconcile with the traditionalist group.

The pope later repudiated Bishop Williamson’s remarks, saying he had been unaware of the bishop’s views on the Holocaust. The pope met with Jewish leaders at the time to calm tensions over the incident.

Additionally, the Vatican told Bishop Williamson that he would not be welcomed into full communion in the church unless he disavowed his remarks about the Holocaust and publicly apologized. To date, Vatican officials have said, he has not met that condition.

The appeals court ordered Bishop Williamson to pay a fine of about $9,000, an amount that was reduced by about one-third from an earlier sentence.