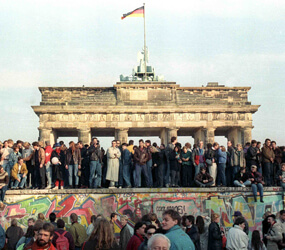 COLOGNE, Germany – A German cardinal said various commemorations of the collapse of the Berlin Wall ignore contributions by the Catholic Church.

“It is simply untrue, as many critics maintain, that the church was introverted – just the opposite,” said Cardinal Joachim Meisner of Cologne, who served as bishop of Berlin 1980-88.

“Throughout these years, Christians formed a living protest against this inhuman system,” said the cardinal. “Yet in the many declarations, speeches, interviews and books appearing for the 20th anniversary, the church’s role is being evaluated and covered only very superficially, even by Catholics.”

On Nov. 9 Germans will commemorate the 1989 fall of the wall, which divided West Germany from the communist-ruled East Germany for 28 years. The anniversary will include a “Festival of Freedom” in Berlin, during which 1,000 giant foam dominos will be toppled along the route of the wall.

In an Oct. 26 article in the Die Welt daily, Cardinal Meisner said that under communist rule the Berlin Diocese never adjusted its boundaries, and church officials refused to participate in state ceremonies. Berlin became an archdiocese in 1994.

“The complete absence of our bishops on such occasions was always seen as relativizing the system,” said Cardinal Meisner. “Diplomatic representatives in East Berlin repeatedly emphasized their admiration for the Catholic Church’s stance.”

Cardinal Meisner said most commentaries had focused only on the final steps in Germany’s reunification, without mentioning “the 999 steps taken earlier,” in which Catholics played a key role.

The cardinal said the Catholic Church had been viewed as a “tolerated subtenant” of East Germany, but had managed to provide “an annoyance, a protest against the unified mass and an actual testimony for Christ.”

He added that lay Catholics had offered a “biblical testimony of nonparticipation” by boycotting communist institutions, such as the “Jugendweihe” youth enrollment, and by continuing daily social and charitable activities.

Cardinal Meisner said some commentaries recalled the role of Lutheran churches as gathering places for protesters, while ignoring key events such as a 1987 Catholic Katholikentag festival that brought 100,000 people onto the streets of Dresden.

“My words to the main Mass at that festival, that we would follow no other star than the Star of Bethlehem, were clearly understood as a political signal,” the cardinal added.

“I think today of the many people who helped bring about the events of Nov. 9, 1989, through unspectacular resistance along the way. They deserve their own monument, or at least to be included in the historical record,” he said.

The 124-mile Berlin Wall, separating the German capital, was completed Aug. 13, 1961, after 3.5 million East Germans, a fifth of the population, fled to West Germany. The wall later was strengthened with guard towers and a mined “death strip.”

Crossing points in the wall were opened by East Germany’s communist regime during a wave of revolutionary change in Eastern Europe, paving the way for Germany’s formal reunification in 1990.