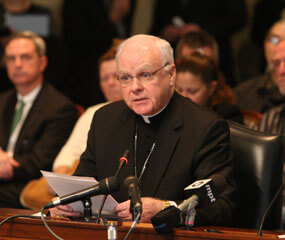 It’s becoming a familiar problem in Annapolis: an empty checkbook.

One year after lawmakers dealt with a $2 billion budget deficit, they are facing another enormous shortfall – this one projected at more than $1.4 billion.

Legislators may be tempted to snip the social safety net and reduce textbook funding for nonpublic schools as ways of closing the gap. That won’t happen without a fight from the Maryland Catholic Conference (MCC), public policy arm of the state’s Catholic bishops.

“The most imperative responsibility we will have as a church community is to fight loud and hard for protecting the needs of the very poor and vulnerable,” said Mary Ellen Russell, MCC executive director.

As the 90-day session of the Maryland General Assembly kicked off Jan. 12, MCC leaders planned to play a major role in other public-policy debates. Chief among them will be upholding traditional marriage, promoting a ban on the death penalty and passing stronger regulations on abortion clinics.

One of the session’s most intense debates will likely be the legalization of same-sex marriage. Russell said the MCC will work with parishes and other constituencies to encourage lawmakers to uphold the traditional definition of marriage as being between a man and a woman.

“As we look at the composition of the Senate and House floor vote, we strongly believe that the possibility of redefining marriage in our state is by no means inevitable,” said Russell, emphasizing that the church respects the dignity of homosexuals.

“I think it’s only inevitable,” she continued, “if supporters of traditional marriage stand on the sidelines and don’t speak up for marriage.”

With so much work to be done in the legislature, Russell said she believes lawmakers may have a “fair amount of reluctance” to take on same-sex marriage “if it’s clear the votes aren’t there to prevent the debate tying up the floor for a long period of time.”

In the wake of several high-profile cases in which women were killed or seriously injured while undergoing an abortion in Maryland, the MCC will be lobbying hard in favor of a law that would regulate abortion clinics as ambulatory surgical facilities rather than simply as doctors’ offices.

Nancy Paltell, MCC associate director for respect for life, said abortion clinics are not currently required to have the emergency procedures and safety policies in place that could save a woman’s life when an abortion goes wrong.

“We want to stop these preventable deaths and women’s injuries,” she said. “Maryland women are dying at a rate several times the national rate at which women die of abortion.”

Paltell noted that Stephen Brigham, who had lost his medical license in several states and wasn’t licensed in Maryland, brought women into Maryland for late-term abortions at his Elkton clinic because of the state’s lax abortion laws.

During an abortion of a 21-week-old fetus, a woman was severely injured at the Elkton center. Because the clinic was not regulated as an ambulatory surgical facility, Paltell noted that the bleeding woman was driven to a hospital in a personal vehicle rather than an ambulance.

Paltell added that Dr. LeRoy Carhart, a doctor who provides late-term abortions, recently relocated to Maryland from Nebraska after that state banned abortions after 20 weeks’ gestation.

“He surveyed all the states and he chose Maryland because our laws are so lax that he could very easily and quickly set up shop here,” Paltell said. “So, it all comes down to the fact that our clinics are not regulated to protect the health of women.”

On other life fronts, the MCC will monitor the implementation of health-care reform to make sure the conscience rights of religious institutions are protected and that there is no expansion of public funding of abortion.

The lobbyists will work with lawmakers to develop a funding mechanism to encourage umbilical cord blood banks to partner with Maryland hospitals so that adult stem cells can be collected for medical research. They also hope to establish a sickle-cell-disease research program that would rely on adult stem-cell research.

“It’s so maddening that we continue to pour Maryland taxpayer dollars into embryonic stem-cell research that has never cured anyone, while we abandon the researchers who are doing adult stem-cell research and improving people’s lives,” Paltell said.

A vote on the death penalty seems likely in 2011, and the MCC is working to ban capital punishment in Maryland.

“The outcome of the 2010 elections – especially in the Senate – has given new hope to the possibility of repeal,” Russell said. “I think that similar to other issues, the leadership of the governor (Gov. Martin J. O’Malley) can be critical in this area.”

Protecting the poor and vulnerable

Louis Brown, MCC associate director for social concerns, pointed out that poverty in Maryland rose from 7.4 percent in 2000 to 9.1 percent in 2009. Unemployment currently stands at 7.4 percent – the highest level since 1983.

Food hardship also seems to be on the rise, Brown said, as a recent Gallup poll showed that 14 percent of the population had experienced not having enough food to feed their families at some point last year.

The MCC will pressure lawmakers to preserve funding for programs such as the Service Linked Housing Program, the Temporary Disability Assistance Program and Respite Care.

“We are also working to encourage the state to maintain and improve staff levels at the Department of Human Resources,” Brown said. “It has woefully inadequate staffing levels right now that seriously slow the pace of the distribution of public benefits to those who are already in need.”

The MCC will support a proposal to provide in-state tuition rates to Maryland high school graduates regardless of their immigration status.

“It gives them greater opportunities to become more responsible, more productive citizens in Maryland,” Brown said. “It is also another opportunity to bring those graduates who are here more fully into the fabric of their community.”

Brown said the MCC will oppose any effort to pass legislation similar to a new law in Arizona that requires local police to enforce federal immigration laws.

“We feel that local enforcement of federal immigration law pushes the immigrant community into the shadows as opposed to have them be a part of our society since they are indeed here and going to church with us and working amongst us,” he said. “Laws like the one in Arizona undermine relationships between immigrants and police.”

At a minimum, Ellen Robertson, MCC associate director for education and family life, hopes lawmakers will maintain the current $4.4 million in funding for nonreligious textbooks and technology in nonpublic schools. She also is working to establish the BOAST (Building Opportunities for All Students and Teachers) business tax credit.

BOAST would give businesses a 75 percent state income-tax credit in exchange for their donations to groups that provide scholarships for nonpublic school students. It would also help nonpublic schoolteachers and enrichment programs in the public schools.

While Robertson is confident there are enough votes on the floors of both legislative chambers, the challenge will be getting the measure out of the House of Delegates Ways and Means Committee where it has languished the last several years.

“We need to encourage the speaker (Del. Michael E. Busch of Anne Arundel County) and ask for his support of the legislation, which would then further its cause,” she said.

Robertson said the committee’s new vice chair, Del. Sandy Rosenberg of Baltimore, will be an asset to the committee as he is a BOAST supporter.

Because of budgetary difficulties, BOAST supporters are not seeking funding for the program this year. They are merely trying to have it passed into law so that the governor may fund it in the future.

The MCC believes passage of BOAST could help prevent other nonpublic schools from closing.

Visit www.catholicreview.org/matysekblog for more on enrollment trends in Catholic schools.