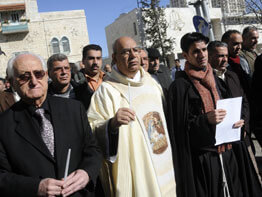 JERUSALEM – The pastor of the Catholic parish in Gaza City described Gaza as “drowning in blood” as hospitals overflowed with patients.

In a message to participants in a special Mass for peace at St. Stephen Church in Jerusalem Jan. 4, Monsignor Manuel Musallam, pastor of Holy Family Parish in Gaza City, wrote: “What you see on television cannot be compared to what is happening. The word love is choking in my throat. … We are living like animals in Gaza. We cry and nobody hears us. I am asking God for mercy and pray that the light of Christianity continues to shine in Gaza.”

Church leaders from the Holy Land attended the Mass at St. Stephen’s while local and international Christians gathered elsewhere in Israel and the West Bank to pray for a halt to the violence in Gaza. When Israel began its military operation in Gaza in late December, the heads of Christian churches in the Holy Land called for Jan. 4 to be a day of prayer for peace.

At St. Stephen’s, retired Latin Patriarch Michel Sabbah of Jerusalem said the Israeli incursion into the Gaza Strip means death for both sides.

“What is happening now is death for Palestinians as well as Israelis,” Patriarch Sabbah said at the Mass. “What is happening in Gaza has made us all come to pray and join in a prayer that says stop the massacre. We are calling to God to look at Gaza and see what is happening there and to all of us.”

Peace only can come through justice, not war, he said.

“We are looking at ourselves and we are not doing our best. Israel should stop this and will stop, but then after this destruction there will be more destruction,” he said.

He called on Palestinians to realize that the only way to regain their freedom and independence is through nonviolent means.

Earlier in the day at St. Catherine Church, adjacent to the Church of the Nativity in Bethlehem, West Bank, Christians attended a special Mass.

“This is genocide,” said Bethlehem resident Adel Sahouri, 70, who attended the Mass. “Israel is so strong and has all the weapons the world can afford. What does Hamas have? Just rockets, nothing.”

Israel launched a ground attack in Gaza Jan. 3 after several days of airstrikes to stop the Palestinian militant group Hamas from launching rockets into Israel. Since the start of the airstrikes Dec. 27, at least four Israelis and more than 500 Palestinians, including 100 civilians, have been killed.

Israel says that during the past year Iranian-backed terrorist groups in Gaza have fired more than 3,000 rockets, missiles and mortars at civilian targets in the southern Negev region of Israel.

In a center pew of St. Catherine’s, Victor Zoughbi knelt in prayer.

He told Catholic News Service after Mass he was praying “not just for the people in Gaza but also for those in Tel Aviv. Every (Israeli) soldier going into Gaza now has a mother who is sitting glued to the television with her heart in her throat. He who truly has God in his heart loves everybody.”

Mr. Zoughbi said he did not understand the purpose of Hamas’ rockets, given their inaccuracy, and he emphasized the fact that there is only one Palestinian government headed by Palestinian Prime Minister Mahmoud Abbas. In June 2007, Hamas split with Abbas’ Fatah movement and took control of the Gaza Strip. Abbas’ government still controls the West Bank.

“What are we fighting over – for a piece of land? Take the land. In the end the land will swallow us all,” he said, noting that, given the situation, he was not able to speak so freely with many of his friends and acquaintances lest his loyalty be called into question.

After the Mass in Bethlehem more than 50 worshippers – carrying a flower wreath, placards calling for peace, a black mourning flag and a Palestinian flag – processed around Manger Square reciting Psalm 50, traditionally said at funerals.

A buzz began in some of the small groups gathered outside the church as a rumor circulated that Hamas had taken some Israeli soldiers hostage. Israel denied the claim, and the rumor later proved to be false.

“What is going on is war and I am praying to stop it. I am not waiting for people to hear (my prayer); I am waiting for God and, whatever God’s plan is, we will follow,” said Rosemarie Nasser, 55. “No one understands that God has his own time. So many times in our lives God uses the bad for good.”