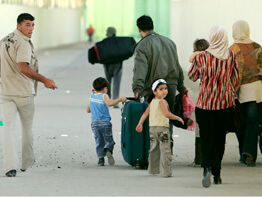 JERUSALEM – The Gaza compound of the Rosary Sisters was ransacked and looted and sacred objects were destroyed during Palestinian infighting that led to the Hamas faction’s takeover of the Gaza Strip.

Monsignor Manuel Musallam, pastor of Holy Family Parish in Gaza, said gunmen used rocket-propelled grenades to break down the doors of the compound, which is located some distance from the Holy Family Parish compound in the Tenalhawa section of Gaza. He estimated damages at more than $500,000.

“This is more than vandalism,” he said. “They forced open the door and entered and destroyed everything. The even put the sisters’ beds on fire.”

He said he was visited by Hamas Cabinet ministers, who denounced the attack, denied Hamas involvement and promised to repair all damages.
Deposed Palestinian Prime Minister Ismail Haniyeh, a Hamas leader, also spoke out against the attack, and Palestinian President Mahmoud Abbas, whose rival Fatah faction has been forced out of Gaza, called it “barbaric.”

Hamas leaders also offered to provide guards for the compound, but Monsignor Musallam said he declined.

The three nuns who run the school and live in the compound during the year had left Gaza June 10, after the close of the school year, as had the two Rosary Sisters from his parish, said Monsignor Musallam.

The priest said he was not worried about Christian-Muslim relations, but expected “best relations” with Muslims based on all the support Catholics had received from Hamas leaders, Muslim religious leaders and Muslim family clans.

He said the Greek Orthodox clergy – all Greek citizens – had already left Gaza, and the only remaining Christian clergy besides him were the Palestinian Baptist pastor and four Sisters of Mercy who run a home for severely mentally and physically disabled children near the parish compound.

Members of Gaza’s tiny Christian community, which numbers only 2,000 Catholic, Greek Orthodox and Baptists among nearly 1.5 million Muslims, continued to express fear about their future.

“We are in a critical situation and we are afraid in our hearts,” said one Christian woman in a phone interview with Catholic News Service; she asked that her name not be used or any identifying details be given. “Our future is not clear. We can either leave or stay to die. They have started to put curses on our heads. This is the beginning.”

World Net Daily, an Internet investigative news site, quoted a militant Islamic leader as warning that any Christian missionaries in Gaza would be “dealt with harshly” and demanding that even non-Muslim women cover themselves in public.

“They must be ready for Islamic rule if they want to live in peace in Gaza,” World Net Daily quoted Sheik Abu Saqer, leader of an Islamic outreach movement that the news site said recently opened a wing to enforce Islamic law in Gaza.

The sheik said Internet cafes, pool halls and the sale or consumption of liquor on the streets would no longer be permitted and that there was “no need” for Christians to maintain a large number of institutions in Gaza. He said Christian schools and institutions would need to prove publicly that they are not proselytizing, according to the report.

The Christian woman told CNS only people with foreign passports have the possibility of leaving, but even they cannot escape because all the exit routes from Gaza have been closed.

Media reports described groups of Palestinians crowding the Israeli-maintained Erez checkpoint in hopes of being permitted to leave. According to the press reports, Hamas has set up checkpoints along the way to prevent people from fleeing as well as trying to find Fatah operatives. Hamas has also closed off the Rafah border crossing into Egypt.

One Palestinian was killed and at least 10 wounded June 18 at the Erez checkpoint when gunmen from a Palestinian grass-roots paramilitary organization opened fire for unknown reasons on Palestinian civilians awaiting permission to cross into Israel to seek refuge in the West Bank.
The Palestinian-controlled West Bank and Gaza are separated by about 30 miles of Israel.