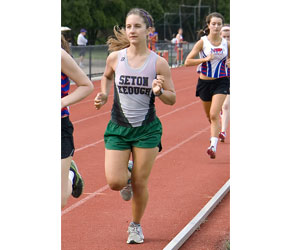 The saying, “no pain, no gain,” takes on a very literal meaning for Seton Keough senior Rebecca Stevick.

A multi-sport athlete, Stevick has participated on the swim team for four years and the cross country and outdoor track teams for three years. She said her biggest joy in participating in sports is the bond that’s formed with her teammates.

“I mainly swim and run for the sense of community,” Stevick said. “The team is like your family, and that’s something that I really enjoy.”

Engaging in that camaraderie on such a non-stop basis has no doubt taken an unfortunate toll on Stevick’s body. Stevick underwent arthroscopic labral debridement surgery to repair a hip labral tear in 2008 during her sophomore year. While the injury does not prevent her from participating in sports, it does limit Stevick’s performance.

“She still pushes through it which is pretty impressive to me,” said Louis Foudos, her track and cross country coach. “Even though it holds her back she still puts in effort. I see Rebecca out there doing all she can.”

Stevick showed grit and tenacity by continuing to compete through her recovery. Foudos said the injury bothers her essentially every time she runs, however. Her teammates understand her situation and the effect it has on her he said, and support her as best they can.

“Most people who have dealt with an injury before know what it’s like,” Foudos said. “To not be able to run must be psychologically challenging because you want to be out there with your teammates but you can’t. But they support her, and vice versa.”

Despite whatever shortcomings she may experience from her injury, Stevick’s achievements have not gone unnoticed. She fought through her pain and had one of the top races out of everyone on the team this past season in cross country Foudos said, and she finished all her races. She also received the scholar athlete of the year award at the school’s spring sports awards banquet.

Stevick’s accolades don’t end in the athletic arena either. She was tied for ranking second in her class as co-salutatorian, boasting a 4.6 GPA. She achieved that honor while taking classes that included AP Calculus, AP Computer Science, and Physics.

Stevick is also involved with community service. The St. Mary of the Mills, Laurel, parishioner volunteers with a Special Olympics organization in Glen Burnie. Their will to compete in sports makes her view her own injury in a different light.

“Seeing how much they’re capable of really inspired me to do better with my athletic career,” Stevick said. “Just seeing what they can do gives me hope for myself.”

Foudos links Stevick’s involvement with numerous commitments to her desire to take on any type of challenge.

“The thing that impresses me the most about her is her drive, her dedication, her desire,” he said. “Most people would quit if they had an injury like that too, but she also does so many other things at school – she’s always doing something. She never backs down from a challenge.”