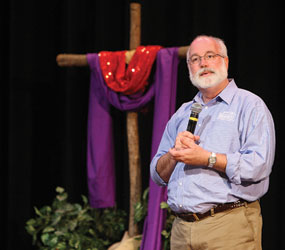 Jesuit Father Greg Boyle, who runs the largest gang intervention program in the U.S., will bury his 165th youth this week.

The executive director of the Los Angeles-based Homeboy Industries, Father Boyle has gotten former gang members invited to the White House for dinner with Laura Bush, blessed the daughter of a gang member before she went off to attend college and witnessed the sheer joy of a gang member starting a new job.

“Dynamic,” “fantastic,” and “passionate,” were words used by participants in the 30th annual Social Ministry Convocation to describe the priest’s keynote address March 7.

On stage at Baltimore’s The Seton Keough High School, the priest drew laughter and even some tears from more than 400 participants as he spoke about helping former gang members in Los Angeles County find gainful employment, remove tattoos and reconnect with family.

“The goal is kinship,” said Father Boyle, whose Homeboy Industries includes the nonprofit entities, Homeboy Bakery, Homeboy Silkscreen, Homeboy Maintenance, Homeboy/HomegirlMerchandise, and HomegirlCafe. “How do we stand against the idea that there might be lives that matter less than other lives?”

“In the end,” Father Boyle said during his workshop, “it’s about a lethal absence of hope. You’re always fleeing something when you join a gang.”

He said gang intervention is not for those who need it, but for “those who want it.”

“Peacebuilding: The Journey Continues,” was the theme of the convocation, which featured a keynote talk in Spanish, a social ministry fair and a variety of workshops on topics ranging from fair housing to immigration. Bishop Denis J. Madden presented several dozen social ministry awards in the afternoon, and Archbishop Edwin F. O’Brien addressed those gathered in both English and Spanish during a morning prayer service.

“We have all experienced situations in which there seems to be no solution, when people have run out of options and are faced with depressing circumstances,” the archbishop said. “And inevitably, instinctively, what do we do? We pray.”

He spoke of how God always listens, and we’re never alone when we pray.

“The same faith, the same spirit that prompts our prayer also prompts the practice of love, and works of justice and charity,” he said. “I would like to thank you for bringing alive, making incarnate, the love of God in our midst.”

Immaculate Conception, Baltimore, parishioner Natalie Dugger, 41, attended the convocation with friends and fellow Ladies of Charity from her church.
“Fantastic,” was how she described Father Boyle’s speech.

“I think for a lot of us who try to reach out to our community, it gives us hope that we can help other people and get them to help themselves,” she said. “Great things can happen.”

She said the sheer numbers –86,000 gang members in Los Angeles County and more than 1,100 different types of gangs – surprised her.

“I was also surprised to hear that former rival gang members have become friends,” she said.

Barbara Hamilton, a St. Gabriel, Woodlawn, parishioner in her 70s, also attended a workshop given by Father Boyle and two former gang members, Louis and Joseph.

“It was all so sincere,” she said. “It took a lot of courage for them to go through what they’ve been through, and they spoke so expressively.”

She said she was impressed with the perseverance and tenacity of Father Boyle, who has been working with gang members for 21 years.

“I thought he was really dynamic,” said Ms. Lavery, of Father Boyle. “I especially liked the concept of kinship.”