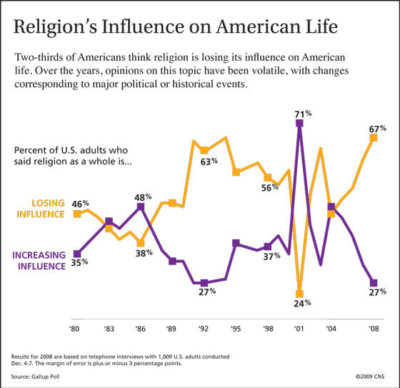 WASHINGTON – Two-thirds of Americans see religion as having a declining influence on U.S. society, marking one of the lowest ratings in the five decades since the Gallup Poll first began asking the question.

The 67 percent of U.S. adults who said “religion as a whole” was losing its influence on American life in a poll released Dec. 23 was exceeded only by the 75 percent who saw a declining influence in 1970, at the height of the Vietnam War, and the 69 percent who saw such a decline in 1994, during the first term of President Bill Clinton.

“After a long period of doubt about the influence of religion during the Vietnam War era – from 1965 through 1975 – a December 1976 Gallup Poll found nearly as many Americans saying religion was increasing in influence, as disagreed (44 percent vs. 45 percent),” said a report on the survey by Lydia Saad, Gallup Poll senior editor.

“This relative high point for perceptions that religion was on the rise could have been associated with the election a month earlier of Jimmy Carter as president, an avowed born-again Christian,” she added.

The high point for those who said religion was increasing its influence came in December 2001, three months after the Sept. 11 terrorist attacks in New York, Washington and Pennsylvania, when 71 percent of Americans saw a rise in religion’s influence.

Ms. Saad said “this measure of public perceptions about religion has been quite volatile” since Gallup first asked the question in 1957, “with shifts in perception often corresponding to major political events.”

The survey also asked whether Americans believe “that religion can answer all or most of today’s problems, or that religion is largely old-fashioned and out of date.”

“The vast majority of Americans who attend church or another worship service weekly (82 percent) say religion can answer today’s problems, as do 59 percent of those attending at least monthly, but only 27 percent of those who rarely or never attend agreed,” Saad said in her report.

The margin of error for the survey, conducted Dec. 4-7 among 1,009 adult Americans, was plus or minus 3 percentage points.