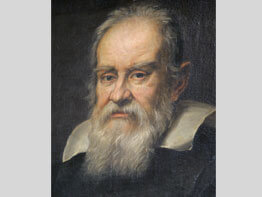 VATICAN CITY – Galileo Galilei, who had been condemned by the Catholic Church’s Holy Office, was a genius and a man of faith who deserves the appreciation and gratitude of the church, the Vatican said.

The 17th-century astronomer was “a believer who tried, in the context of his time, to reconcile the results of his scientific research with the tenets of the Christian faith,” said a written statement released by the Vatican Jan. 29.

“For this, Galileo deserves all our appreciation and our gratitude,” it said.

Galileo was the first scientist to study the cosmos with a telescope, which opened up a whole new frontier for discovery and forced humanity “to reread the book of nature in a whole new light,” it said.

“Therefore, the church wishes to honor the figure of Galileo – innovative genius and son of the church,” it said.

The statement was released during a Vatican press conference detailing a number of initiatives sponsored by Vatican offices during this year’s International Year of Astronomy.

The international celebration commemorates the 400th anniversary of Galileo’s first discoveries using a telescope to study the night sky.

The Italian scientist was condemned for suspected heresy in 1633 for maintaining that the earth revolved around the sun. He was “rehabilitated” in 1992 by a special Vatican commission established by Pope John Paul II.

Now that the flurry of scandal has died down, the church can finally look at the figure of Galileo in a new light and recognize him as a man of faith who believed science and religion did not have to be at odds, participants at the Vatican press conference said.

Archbishop Gianfranco Ravasi, head of the Pontifical Council for Culture, said the Galileo affair “must always bring us – theologians and the church – back to a critical self-examination of the past without reservation.”

But he cautioned against merely re-examining the past without forging a new way forward that is open to a mutually beneficial dialogue between science and faith.

The Vatican’s observatory, its culture council and the Pontifical Academy of Sciences will be among 18 institutions taking part in a world congress May 26-30 to re-examine Galileo’s trial.

The Stensen Institute, a Jesuit-run cultural center in Florence, Italy, has organized the gathering.

The head of the institute, Jesuit Father Ennio Brovedani, said that for the first time in 400 years all the major players in the Galileo affair will be represented at the congress, with the aim of helping alleviate the tensions and misunderstandings still clouding the relationship between the church and science.

The Vatican will also mark Galileo’s anniversary with a new edition of the acts of the trial against Galileo, to be published by the Vatican Secret Archives.

In addition, the Vatican will put out a book on the history of Pope John Paul’s special commission, which was dedicated to examining the Galileo affair. It formally acknowledged that the church erred when it condemned the Italian astronomer.