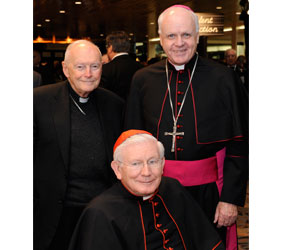 The sounds of a choir of Baltimore City Catholic schoolchildren and the Archbishop Curley High School drumline welcomed 1,100 formally dressed celebrants to the Baltimore Convention Center Oct. 22 for a gala dinner feting Catholic schools in the archdiocese.

Keynote speaker Byron Pitts, correspondent for CBS news and a product of Baltimore’s Catholic schools, was escorted to the stage by Shardae Jones, a fifth-grader at Holy Angels School, who was featured in a video vignette about her transition from Father Charles Hall School and her joy and success in Catholic education.

“This young lady and children like her are the reason why you are here. Her mother is also why we are here,” he said of Shardae’s mother, Tiffany, who as a single parent has raised three daughters, and relies on the tuition support from programs such as those supported by the gala to send her daughter to Catholic schools. “Please know that what happens in Catholic schools in this city is part of what is right in America,” Pitts said.

The newsman, who as he was growing up was diagnosed as functionally illiterate and mentally retarded, thrived when he switched to St. Katharine’s and later Archbishop Curley High School. “Long before I was Byron Pitts of ‘60 Minutes,’ I was a kid from East Baltimore.”

He said he has, at last count, watched 47 people die in the course of his reporting, from executions to wars and other situations. “In many ways, I make my living covering death, and I’ve made my peace with that. But I have not made my peace with indifference,” he said. To combat that indifference, he said it is important to remember there is value in shaping young lives and helping young people share their gifts.

“All of us know the issues that plague our great cities,” Pitts said. But when a child has the opportunities of a Catholic education, it changes their lives, he said.

The Third Annual Gala for Catholic Education included a silent and live auction among the fundraising efforts to support tuition scholarships in Catholic schools in the archdiocese. During the live auction, attendees were given a chance to make a donation, via electronic bidding devices, to directly support the scholarship fund. As the tote board started at $1,750, it jumped quickly to $25,875, and then donations climbed. The numbers scrolled through $27,225, and then past $30,200, then $32,000 and $34,325 and finally $36,025. At that point emcee Scott Garceau of WMAR radio introduced a video honoring Archbishop Edwin F. O’Brien, who inaugurated the gala and the Blue Ribbon study of Catholic schools as a way of re-energizing the Catholic school system in the archdiocese.

The 2011 gala was an opportunity also for the archdiocese to honor the archbishop, who was named recently pro-grand master of the Equestrian Order of the Holy Sepulcher, based in Rome. He remains apostolic administrator of the Archdiocese of Baltimore until his successor is installed, expected sometime in the first half of 2012. For now, he told the crowd, “Here is where I am. I relish the weeks and months I have with you to come.”

He lauded the efforts of students and parents in Catholic schools. “Tonight’s program, I hope, has reminded each of you – as it has me – the real reason we all work so hard to make our schools the best they can be: it is for children like Shar-dae Jones, and her family … and for the next Byron Pitts in our midst.

“We can’t be reminded often enough of the human face of Catholic education and how much of what you are all doing truly means to those we serve,” the archbishop said. “So often we see our schools as buildings and in doing so fail to see them for what they truly are: sanctuaries, places of learning, centers of excellence, safe havens, and cradles of faith, hope and love.”

He noted that a national accreditation team had visited the archdiocesan schools this week, including the schools office and 10 schools selected at random and notified only days in advance of the visit. Archbishop O’Brien beamed like a proud father as he told the crowd, that at one school site visit, the students interviewed by the accreditation team said what they most loved about their school is “their teachers and how they make them feel safe and loved.”

The archbishop announced, “We were informed that this review team has recommended full accreditation of our entire school system. Further, it has commended our schools for their Catholic identity, for the scope of our strategic plan and our top-to-bottom commitment to its implementation, and for our new model of governance: the Archdiocesan Collaborative School.”

Before completing his remarks, he surprised the audience, including one particular priest, by informing Father Adam Parker, that Pope Benedict XVI had bestowed upon him the title of monsignor (chaplain of his holiness). Monsignor Parker has served as secretary (and master of ceremonies, driver and confidante) to Archbishop O’Brien since his appointment as the 15th archbishop of Baltimore in 2007.

Archbishop O’Brien closed his remarks, noting, “As I leave in some months for the Rome branch, the home office of our singular and beloved Catholic Church, I thank each of you and assure you that this archdiocese and her school system will always have a special claim on my prayers,” and then pausing to choke back some emotion, he continued, “and I humbly ask yours for me.” And then he invited the crowd to enjoy the music and dancing that is part of every wonderful gala.