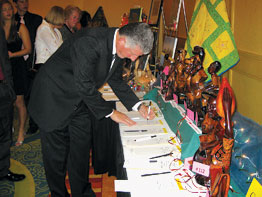 Children in the impoverished Diocese of Gonaives, Haiti, are one step closer to getting a new secondary school thanks to parishioners throughout the Archdiocese of Baltimore.

More than 500 people attended the fourth-annual Gala of Hope Nov. 8 at the Baltimore Marriott Hunt Valley Inn, contributing thousands of dollars for the new school.

“We had the highest attendance ever,” said Dr. Mortel. “I’m really happy with the support we received.”

Ground will be broken on the secondary school this spring and the institution will open in the fall of 2010, according to Dr. Mortel. The school project is being spearheaded by the Mortel Foundation and the Archdiocese of Baltimore. Half the cost of the school is being funded by a $1 million donation from the James M. and Margaret V. Stine Foundation, Inc.

“It will enroll over 1,500 students,” Dr. Mortel said, “and it will be administered by a religious congregation made of priests and brothers.”

Dr. Mortel said he was particularly impressed that many gala participants sponsored more than 40 children – donating $300 per child to help pay for tuition, education expenses and daily meals.

A live auction at this year’s event raised more than $25,000, with bidders winning Orioles box seat tickets, Chesapeake Bay sailing adventures and a Hilton Head vacation among other prizes.

Raymond A. Joseph, Haitian ambassador to the United States, told The Catholic Review efforts like the Gala of Hope are much needed in his suffering homeland. Haiti was hit by four hurricanes in three weeks over the summer, he lamented. A school collapsed and killed approximately 90 children the day before the gala as well.

“To see that people far away from Haiti are concerned about what we are going through warms my heart,” said Mr. Joseph, who attended the gala for the first time. Gala participants paused for a moment of prayer to remember those killed in the school collapse.

“I’m not a very emotional person, but tonight my eyes got misty,” he said. “When I see the way people have come together to raise funds to help Haiti, I say there is hope for Haiti.”

Father C. Douglas Kenney, pastor of St. Ann in Hagerstown, attended the gala with about 50 parishioners. St. Ann has a sister parish in the Diocese of Gonaives that it supports. Parishioners fed more than 500 Haitian preschool children last year through a Lenten program called “Littlest Angels.”

“We have a really strong and committed Haiti committee,” said Father Kenney. “Many of them have been down there to see what happens in the country.”

The Diocese of Gonaives became a sister see when Cardinal William H. Keeler, retired archbishop of Baltimore, formed a Haiti partnership in 1997.

The partnership feeds more than 15,000 Haitian children every day with the help of 17 archdiocesan parishes. The partnership also aids The Good Samaritans School in St. Marc, Haiti.

Dr. Mortel encouraged Catholics to pray for Gonaives and make contributions to support the new school and other outreach efforts.

“The people of Haiti always have hope that things will be better for them,” he said.