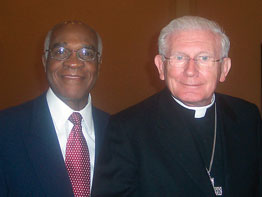 The spirit of Haiti infused the Gala of Hope 2007 at the Baltimore Marriott Hunt Valley Inn Nov. 10.

The annual event raises money for the Baltimore-Haiti Outreach Project, a program that pairs parishes in the Archdiocese of Baltimore with those in Haiti, the poorest country in the Western Hemisphere.

In Haiti, people enroll their children in Catholic schools not to receive an education, but in the desperate hope that they’ll be fed. As a result of the partnership between the Archdiocese of Baltimore and the Mortel Family Charitable Foundation, the Good Samaritans School in Haiti opened in 2001.The school has many facets, including a vocational program named for Cardinal William H. Keeler, which opened this year and prepares children for work in the trades.

Products from Haiti, such as vanilla, coffee, wooden bowls and beautifully carved wooden trays, were offered for sale during the gala. A silent auction also featured Haitian artwork and photography, as well as more American items, such as getaways and a football signed by the Redskins that drew heavy bidding.

The evening began with cocktails and hors d’oeuvres. The elegantly dressed crowd scoped out gift baskets put together by sister parishes here that would be raffled off later in the evening.

The emcee for the event was Missions Office director Deacon Rodrigue Mortel, a retired medical doctor and former director the Penn State University Cancer Center, who splits his time as a deacon between Baltimore and the Diocese of Gonaives, Haiti. He grew up destitute in Haiti, knowing that education would be his only hope, and earned a spot at the Medical School of Port-au-Prince.

Before the formal dinner was served, the large crowd watched a short video about Haiti and the relationships between the sister parishes. “Your attendance means a lot to the poor children of Haiti, who will be fed as a result of tonight,” said Kathleen Jack, chairperson of the gala committee.

Because of the Baltimore-Haiti Outreach Project, 8,500 school children are fed every day. “However, there are 27,000 more waiting to be fed; that will put this dinner in perspective,” Deacon Mortel said.

He also announced that Samuel Chairs had established an endowment of $100,000, and he presented Mr. Chairs with a photograph of the school. Mr. Chairs, co-owner of a family construction company in Ellicott City, has been generous in supporting Catholic organizations.

Mr. and Mrs. Leo W. Rader had given an endowment of $250,000 and the third floor of the school in Haiti will be named for them. Deacon Mortel displayed a handsome brass plaque with the Rader name that will be mounted in the school.

Ann Polk, a parishioner of the Catholic Community of St. Francis Xavier, Hunt Valley, said, “I’m very excited about the archdiocesan committee because we’re helping to build schools and educate people.” She was thrilled to see plenty of bidding action at the silent auction. “The money goes to help those that don’t have sister parishes,” she said, adding that awareness about the plight of Haiti is spreading in her parish. Haitians, she added, “are the poorest of the poor, and you’ve got to help them.”

Father Mark Eddie Dessalines traveled from Haiti for the dinner; pastors have come to visit the sister parishes here in Baltimore, and Baltimoreans have traveled to Haiti. The program, he said through a translator, helped him build a school and provide food for children. He was most moved by the way he’s been received. “The warmth from the people,” he said. “Even if it’s cold here, the way people receive me, I feel loved.”