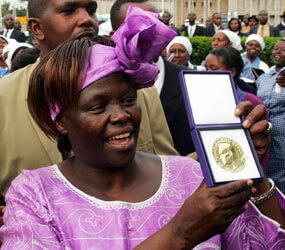 WASHINGTON – A funeral Mass for Wangari Maathai, a Catholic environmentalist and political leader who became the first black African woman to win the Nobel Peace Prize, was set for Oct. 8 in Holy Family Minor Basilica in Nairobi, Kenya.

Plans also called for cremating Maathai’s body, with interment at the Wangari Maathai Institute for Peace and Environmental Studies at the University of Nairobi, per her wish.

Maathai, who died at the age of 71 Sept. 25 after a bout with cancer, has been honored for her efforts to empower women to work for environmental, economic and social justice.

A graduate of Mount St. Scholastica College – now Benedictine College – in Atchison, Kan., with a degree in biology, Maathai became widely known and respected for her efforts on behalf of environmental sustainability through tree-planting campaigns that developed around the world.

Kenyan officials planned to plant a tree in her honor in Freedom Corner in Nairobi’s central business district. Nationwide, local communities were expected to plant another 5,000 trees.

Maathai’s efforts in founding the Green Belt Movement and on behalf of human rights in challenging former Kenyan dictator Daniel arap Moi led to her being awarded the 2004 Nobel Peace Prize.

In 1989, Benedictine College named Maathai – who was known as “Mary Jo” at the school – as a co-winner of its Offeramus Medal, established by Mount St. Scholastica in 1957 to recognize alumnae “who have served others significantly in the spirit of Christ.”

In a 2004 letter to the Benedictine Sisters at the college, Maathai said the sisters “became more than my teachers. They became my friends, mothers and sisters.”

“They touched my life so profoundly and made it so much better then … and now,” she added. “They made the Mount my home and gave me the most wonderful four years, which have partly made me who I am and may ever become.”

Sister Thomasita Homan, a member of the Benedictine Sisters of Mount St. Scholastica, got to know Maathai in the mid-1980s while she was director of alumnae affairs at the college. She maintained that friendship for more than two decades, even attending the Nobel Prize award ceremony in Oslo, Norway, in 2004.

“Everyone there recognized her goodness and strength and that’s what they were really affirming,” Sister Thomasita told Catholic News Service Sept. 26.

“That’s a part of the reason Wangari Maathai is so important to the world. She does not act on her own. She acts in a way that you become one with the movement to whatever needs to be done to improve our world,” she added.

The Catholic bishops of Kenya said Sept. 29 that Maathai was an inspiration to people in the church and across society.

“She was firm and decisive in putting forth the interests of the environment and human rights,” the bishops said.

“Even in death she stands out as our icon, with untold levels of inspiration,” they added.

Maathai married in 1969 but divorced in the 1980s after her husband, a legislator, accused her of being “too educated, too strong, too successful, too stubborn and too hard to control.”

A biography on the Green Belt Movement website said Maathai was born in the village of Ihithe, near Nyeri in Kenya’s Central Highlands, April 1, 1940. As a young girl she was taught by Catholic missionary nuns and graduated from Loreto Girls’ High School in 1959.

In the 1970s, Maathai became active in the National Council of Women of Kenya and began meeting with rural women, learning about the deteriorating environmental and social conditions affecting poor Kenyans. Their concerns focused on a lack of firewood for cooking and heating and the scarcity of clean water, leading to a shortage of nutritious food, according to the biography.

Maathai suggested the women plant trees because the effort could provide wood for cooking, fodder for livestock, material for fencing, protection for watersheds and stability for soil, thus improving agriculture, the biography said. The suggestion marked the beginning to the Green Belt Movement, which has led to the planting of more than 47 million trees in Kenya.

The effort initially was met with resistance by the Moi government, which labeled the movement “subversive,” The New York Times reported. During one protest against the government, police beat Maathai unconscious.

In 2002, five years after an unsuccessful run for the country’s presidency, Maathai was elected a member of the Kenyan Parliament. She subsequently was appointed assistant minister for environment, natural resources and wildlife. She also traveled the world, discussing environmental sustainability and the dangers of climate change to the world’s most vulnerable people.

With Maathai’s assistance, the United Nations Environment Program adopted a worldwide tree planting campaign in 2006. More than 1 billion trees were planted within months, and the campaign has set a goal of planting 14 billion trees, the Green Belt Movement reported.

Maathai is survived by three children and a granddaughter.

Contributing to this story was Francis Njuguna in Nairobi.