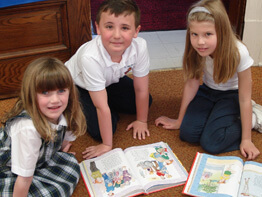 Parents, administrators and other supporters are pulling out all the stops to keep St. Michael School in Frostburg from closing its doors forever.

Since January, they’ve sponsored massive fundraisers, advertised in the local newspaper, attended local events to promote the school and reached out to alumni and friends.

Their efforts seem to be paying off. Not only have they raised thousands of dollars, but enrollment seems to be moving in the right direction.

Kathy Black, principal, said 81 students are already enrolled for next year – the highest level the principal has ever seen this early in the year. There are currently 85 students in the elementary school, which serves students in pre-K-5.

“It’s been a shot in the arm,” said Ms. Black, lauding the hard work of many people in the school, parish and civic community. “We are right on track.”
The school will be open next year, the principal said. She hopes the recent positive developments will continue and give St. Michael a more certain long-term future.

Like many schools in Allegany County, St. Michael has suffered a steady decline in enrollment in the last decade as young families have moved away to find jobs outside the economically hard-hit region. Four public elementary schools have closed in Cumberland in the last 10 years. In the Catholic school system, St. Peter School in Westernport closed and St. John Neumann School in Cumberland consolidated with Bishop Walsh School in Cumberland.

St. Michael, which dropped its middle school several years ago and is no longer subsidized by the parish, remains as the only Catholic school west of Cumberland and east of the West Virginia border.

Jane Rossi, a member of the school’s parent-teacher organization, said her group expects to meet or surpass its $50,000 fundraising goal for this school year. Reaching out to alumni and other supporters has raised another $8,000, she said.

“This is not a march just to save the school,” Ms. Rossi said. “We want to make this community as strong as it can be. The school is good for the parish and good for the community across the board.”

A local dentist is paying for weekly advertisements promoting St. Michael School in the local newspaper, according to Ms. Rossi. The school has also benefitted from special events at local restaurants and other businesses.
Renewed enthusiasm was evident at a recent school benefit auction, which had record attendance and raised more than $12,000. Many volunteers are also stepping forward to help the school, Ms. Rossi said.

“I feel wonderful about where we are right now,” said Ms. Rossi. “We’ve had a lot more exposure. The confidence level is definitely up.”

Father James Hannon, pastor of St. Michael and six other parishes in Western Maryland, called the efforts of the community “amazing.”