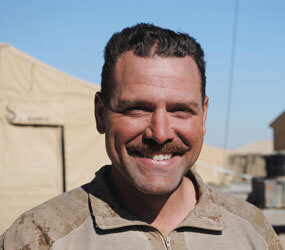 FORWARD OPERATING BASE GERONIMO, Afghanistan – The Marines at this base like to say that every day is Groundhog Day, referring to the Bill Murray comedy in which a TV weatherman awakens each morning to find he is reliving the same day of his life over and over again.

But given the fact that these Marines are located in Afghanistan’s Taliban-plagued Helmand province, every day holds danger and has the potential for disaster. So many of their New Year’s resolutions concerned those they value most – family members at home.

Gunnery Sgt. Mike Brown of Jacksonville, Fla., said his current deployment has helped him come to a special resolution for 2010.

“I want to make every second count with my family,” he said, referring to wife, Melanie, and children Dru, 10, and Aaliyah, 5.

Lance Cpl. Daniel Triebell, who attends Our Lady of Grace Church when he is home in Melbourne, Fla., said his resolution was simple: “Just to stay out of trouble, to keep going on the right path.”

Staff Sgt. Savier Roman said his resolution was to start a family.

“I just got married to my wife, Theresa, before this deployment,” said the member of St. Catherine Parish in Sebring, Fla. “We want to try to have kids after I return in June, or shortly after.”

“I just want to go home to Long Island,” said Pfc. Matthew McArdle, of St. John the Evangelist Church in Riverhead, N.Y. Now a motor transport mechanic at Geronimo, he said he also hopes to “get promoted to lance corporal.”

Retired Gunnery Sgt. Jerome Joseph, who advises the Marines as a civilian tactical safety specialist at Geronimo, is older than the other 20-something Marines, and his New Year’s resolutions showed some of the wisdom of age.

Joseph is from the U.S. Virgin Islands; he and his family now attend St. Ann’s Church in Kaneohe, Hawaii, as well as Our Lady of Perpetual Help Parish in nearby Ewa Beach.

“For this year I’d like to show more compassion for people, yet be stern, strong in my job and in my life,” he said. “I want to be more understanding with my children and, of course, get closer to Christ. When things get really frustrating and tense you can forget about Christ, and that’s when you need him the most,” he said.

He reflected that a life of faith is especially important for those who regularly put their lives on the line.

“When you complete your task you’re fortunate to be alive and with God,” he said.