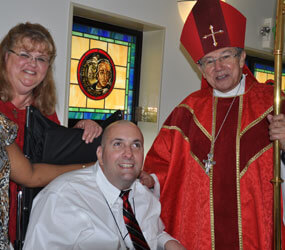 He used drugs to escape reality, going to desperate lengths to feed his habit.

The habit that drove him to despair literally crippled him. Reuling, now 47, suffered a catastrophic seizure in 2003, when he overdosed on a combination of cocaine and heroin.

Gaining consciousness, he awoke blind. Motion in his legs and arms continues to be limited and his speech is severely affected.

“I never blamed anybody but myself,” Reuling said, adding, “I’m more blessed today than I’ve ever been in my life.”

At first glance, that seems doubtful, yet there Reuling was April 2, clutching the hand of Auxiliary Bishop Denis J. Madden at St. Clement Mary Hofbauer Parish in Rosedale. An hour after Bishop Madden had confirmed Reuling in the Catholic Church, he prayed over the bishop. He felt like a complete Catholic.

“It’s been a beautiful day,” Reuling said. “It’s all because of Jesus.”

During Bishop Madden’s homily, as he read from a letter written by Reuling that detailed his dark past, many in the church, including fellow confirmandi in their teens, were overcome with tears.

How a man can spend one decade filling up a rap sheet and in the other personally touching the heart of a Roman Catholic bishop is the story of a remarkable journey.

Baptized as a child, Reuling never received the sacraments of reconciliation, holy Eucharist or confirmation.

He was raised in Southeast Baltimore, in the O’Donnell Heights projects. Painful memories overwhelm Reuling, who now lives in a Dundalk apartment.

His parents divorced when he was 7. His mother, Joan, raised his brothers and sisters mostly by herself. Reuling said that his father abused his mother. Reuling was running with a bad crowd by the time he was in the eighth grade, and was eventually kicked out of school.

“I can’t blame it on the environment,” Reuling said. “We’ve all got choices to make in life. I made the wrong choices. Now, I’m trying to make the right choices.”

Even though Michael had betrayed his mother, she never lost faith in him.

“My mother was always there for me,” Reuling said. “She came to jail.”

While in prison, he was invited to study the holy Bible. A conversion was coming.

“I knew I made mistakes,” he said. “I was begging for forgiveness.”

As an extraordinary minister of holy Communion, Mary Schaefer is a regular visitor to Baltimore nursing homes. A parishioner of St. Clement, she remembers walking off an elevator once and hearing shrieks of pain coming from Reuling’s room.

“They just had him under so much medication,” Schaefer said. “The ironic part is that he got there because of drugs. They kept him sedated.”

Schaefer’s heart broke for Reuling. She learned of “his terrible, terrible background.” It didn’t matter. She saw God in the eyes Reuling could no longer use.

Reuling wanted to learn more about the faith in which he was baptized. Schaefer approached her pastor, Conventual Franciscan Father Donald Grzymski, about the possibility of her educating Reuling in his apartment, one-on-one. Father Grzymski approved.

“She has encouraged him and helped him,” Father Grzymski said. “It’s a wonderful story, of how she became his spiritual caregiver, and his wanting more of his faith.”

Over the last few years, Schaefer spent one day a week, serving as a catechist for Reuling. He went to confession for the first time in 2010. The sacrament fills him with hope, lightening the burden on his soul.

It would not have been possible without Schaefer. She served as his confirmation sponsor, and they will continue to meet for religious lessons.

“She’s a blessing in my life,” Reuling said of Schaefer. “She’s like a mother to me.”

Reuling takes a 15-minute ride on an MTA bus from his apartment to St. Clement every week for Mass. It’s not possible without full-time aide Christiana Iroka, who lives in his apartment.

While Father Grzymski said children were curious about Reuling when he first began attending weekend Masses in 2009, he has become a fixture near the front of the St. Clement church.

Reuling wants to share his cautionary tale at schools, as he doesn’t want young people to make the same mistakes he did.

“I feel like the Lord put it in my heart to tell people my story,” Reuling said. “It’s what I need to do.”

Added Schaefer, “He would be so inspirational because he doesn’t have a mean bone in his body.”

Reuling isn’t done with his sacramental journey. He has another goal that he believes will complete him: marriage.

For a powerful video of Michael Reuling, visit CatholicReview.org/palmerblog.