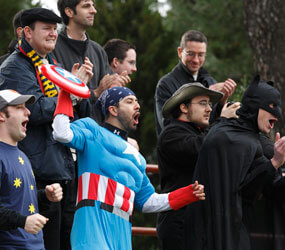 VATICAN CITY – It was a weekend of hard-earned wins for Team USA.

And miracles don’t just happen on ice. The Clericus Cup priestly soccer series in Rome got off on the right cleat Feb. 20 when the U.S. team beat the Brazilians 5-4 in a tie-breaking shootout.

What made the Pontifical North American College’s victory stand out even more was that the team was not only without its leading scorer from last year, but that same star player had signed up for the opposing squad. Brazilian forward Joao Kalevski, who netted the NAC Martyrs 11 goals over 10 games in 2009, now plays for a newly formed team from the Brazilian College.

Now in its fourth season, the Clericus Cup continues to challenge players to put their Christian values on the line every game and offer the world a more ethical role model in sportsmanship.

Victor Ingalls, a second-year seminarian from Montgomery, Ala., who plays stopper for the Martyrs, said sport is the best training ground for putting to the test Christ’s call to love everyone, even one’s enemies.

The unity and joy the players seek to build with everyone even when they win or lose are “the greatest testimony that we can give to the world,” he said in an interview with Catholic News Service Feb. 18.

But it’s not easy, even for men dedicated to holiness.

Stats from last year showed that despite all good intentions, some of the 386 players involved in Clericus Cup series got carded 68 times over the course of the season’s 64 games. The yellow card for a foul or unsportsmanlike conduct was brandished 62 times and the red card, which results in expulsion from the game, was wielded six times. Only one player last year got the soccer series’ unique “sin bin” blue card, which is a five-minute expulsion for players who get carried away and need time to cool down.

The Martyrs’ coach, David Santos, is a second-year seminarian from Kearny, N.J., who plays center midfield. He told CNS that playing sports his whole life has helped him “hone the competitiveness that’s inside of us.”

“When you get a bunch of guys on the field and you’re playing together, you get a little hot and real competitive and so you learn (how) to treat each other like brothers,” he said.

Tempering those aggressive instincts, he said, are critical “human skills you’re going to need as a seminarian and eventually as a priest.”

One thing that helps players keep it all in perspective is that many of them are friends with players from other teams since they often attend the same classes and events as part of their seminary studies.

Whenever a team wins or loses, it’s easier to “just continue with life as normal” because of those bonds of friendship, said Santos.

The goal of the soccer series, he said, is to show that people from all over the world can come together, compete fairly, and “be able to just recognize that somebody has to win, but at the end we’re all brothers and there’s definitely more important things in life.”

But that doesn’t mean players still don’t have their eye on victory.

The Anglo-Celtic Colleges United – a new team made up of priests and seminarians from the Beda, English, Irish and Scots colleges – have brought in two Italian coaches, one of whom trained a major-league soccer team in Lithuania. The returning coach for Rome’s Pontifical Gregorian University’s team is the former head of a minor-league Italian soccer team, and the Polish College has its star player returning, Michel Abe, who played major league soccer in Cameroon in the early 1990s.

Even without pro players and coaches, the NAC Martyrs were undefeated last year up until the final match when they came in second behind the team from the Neocatechumenal Way’s Redemptoris Mater seminary.

Santos said the Martyrs’ winning combination of “dedication, perseverance and skill,” as well as the desire to bring the championship cup home, will add up to “a really successful season” in 2010.

Ingalls, who is also a team captain, said he hopes not only to win the tournament, but more importantly, to bring the men at his seminary and others even closer together.

The Clericus Cup series “has created this amazing spirit where guys spend tons of time” making posters and coming up with cheers, he said. The college even has a booster club to help fill the stands with fans, who include famous (costumed) U.S. icons like Captain America, Batman and Elvis.

The Catholic sports association that organizes the Clericus Cup also has set up a Facebook page so people from all over the world can become a fan and see photos, news and status updates from players and other fans.

Each game already includes a “third half” in which players came together in prayer at the end of the match.

But Ingalls said many seminarians wanted to set the right tone before each game, too, with a blessing and prayer “so that we are beginning and ending everything in prayer just like we try to do in our lives.”

He said he hopes this small but powerful gesture will make playing the series an even more positive experience and help the players “become better men, become more Christian men – that’s what we’re all here to do.”