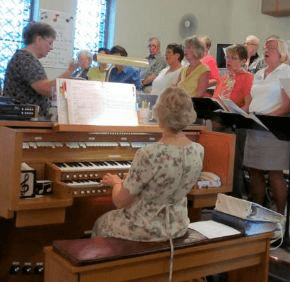 SOUTH PLAINFIELD, N.J. – Where to get enough money to keep the place and its programs running is a perennial problem for every parish, although the scale of the amount of money involved can be dramatically different.

At the Church of the Sacred Heart in South Plainfield, finances have stabilized after a period of declining Sunday collections. Father John Alvarado, pastor since 2000, said the parish has learned to make do with fewer dollars by tightening expenditures and delaying some maintenance work.

As part of a look at how different types of parishes handle contemporary challenges, Catholic News Service reporters visited churches around the United States over the past few years.

But things have improved financially at the parish in the Metuchen Diocese; Sunday collections increased after the parish Finance Council implemented two changes.

That concept was part of the parish’s identity as a tithing community, whereby people contributed what they could privately. But the members of the Finance Council decided they had to boost income to end the need to cover annual deficits with money from parish reserves.

Father Alvarado acknowledged he does not like to talk about money at Mass, preferring to use the bulletin to inform parishioners about weekly collections with a comparison to the previous year.

Sacred Heart had for years urged parishioners to tithe, keeping talk of money on the sidelines. Individual members would speak at weekend Masses occasionally about the concept of tithing and what it meant to their families to be able to support the parish in such a committed way.

While tithing is still preferred, after the parish was forced to tap reserves to cover an operating deficit of more than $79,000 in the year ending June 30, 2014, the Finance Council decided money issues needed to be brought to parishioners directly, and bluntly.

Annual parish income at Sacred Heart was a bit more than $1 million, while expenses topped $1.1 million.

At St. Francis of Assisi Parish in Manitowoc, Wisconsin, Deacon Bob Beehner said the stewardship approach helped get his parish out of the deep red of about a decade ago.

St. Francis is a relatively new parish, founded in 2005 to replace the city’s six previous churches. Among the growing pains of the reorganization was getting out of debt. The last year for the six churches, the parishes’ collective budgets ran $570,000 in the red, Deacon Beehner said. The first year St. Francis existed, it ran a $500,000 deficit.

Firm business principles eventually got the parish on better financial footing, Deacon Beehner said. “To pull everything under one central operation we had to be really creative.” Two of the former parish complexes were sold, which also cut down on maintenance expenses.

The most recent St. Francis budget, including its support for the regional elementary and middle school, came in at $4.2 million, with about a $33,000 deficit between income and expenditures.

Part of bringing the budget under control came by linking spirituality with the concept of stewardship, Deacon Beehner said.

When retired Auxiliary Bishop Robert F. Morneau of Green Bay started encouraging the concept of stewardship as a commitment he wanted people to make after praying seriously on the topic, “I thought he was taking the easy way out, not really talking about money,” Deacon Beehner said. “I came to realize prayer is a huge part of it.”

From having been more than half a million dollars in debt a decade ago, being close to breaking even is a solid accomplishment, Deacon Beehner noted.

The 2013-2014 financial report showed slightly fewer registered households than in the previous two years, at 4,535, for a total of about 10,300 parishioners. Of that, 51 percent were counted as “giving households,” about the same as in the two previous years. But the average annual gift increased, up by 6.3 percent in the last year to just over $1,000.

In Greenwood, Mississippi, Franciscan Father Gregory Plata, pastor of the town’s two parishes – St. Francis of Assisi and Immaculate Heart of Mary – is accustomed to running everything on a shoestring. The bulletin – shared by the two churches – reports weekly on the collection and how the amount donated matches up with operating expenses for each parish. Most weeks, the two figures are pretty close.

St. Francis, which was founded by the Franciscans in 1950 to meet the needs of African-Americans who were unwelcome in other parishes, still primarily serves a poorer congregation than its neighbor. In addition to a dwindling population of African-American parishioners, St. Francis’ makeup now includes Latino immigrants who came to the area to work in agriculture and commercial catfish operations. Those manual labor jobs don’t pay well and many parishioners send money to family in their home countries.

In addition to the pastoral staff, the two parishes share some functions, such as the religious education program. But they remain distinct parishes and finances continue to be separate, he said.

St. Francis School, still a key part of the Franciscan friars’ and sisters’ outreach to the underserved poor of the Mississippi Delta, gets by on an even thinner shoestring, according to its principal, Franciscan Sister Mary Ann Tupy.

She frankly admits that the only way many of the teachers can afford to work there is that they are retired from jobs in the public schools, so their pensions make it possible to get by on the small salaries St. Francis can pay.

“It would be tough for someone with a single income to survive on what we pay,” she said.

The Diocese of Jackson contributes $25,000 to $30,000 annually to the school’s budget, said Sister Mary Ann, and one of development director Franciscan Brother Craig Wilking’s main jobs at St. Francis is to seek grants and other funding.

“White Catholics in Greenwood see Pillow Academy as their school,” she said. Pillow is an independent college prep school founded in 1966 as a “segregation school” when desegregation became the law for public schools. A recent demographic profile of Pillow reported a student body that was 96 percent white, with less than 2 percent each black and Asian-American students.

Meanwhile, just 450 miles to the west of Greenwood and at the other end of the fiscal scale, St. Ann Parish in Coppell, Texas, operates on an annual budget of about $7 million. That support is contributed by the 30,000 parishioners, making the Diocese of Dallas parish numerically larger than several U.S. dioceses and most of those in U.S. territories.

Its budget covers the expenses of about 100 ministries, the maintenance of a massive church compound as well as contributions to various charitable activities. Its average weekly collection in the last fiscal year was $96,436, or about $11,000 more than the entire annual budget of $75,000 for another parish CNS visited, St. John by the Sea in Klawock, Alaska.

St. John serves the entire Delaware-sized Prince of Wales Island. Some communities have only a handful of people at Masses each week. It receives financial support from the Catholic Home Missions Appeal, taken up annually in U.S. parishes. The former pastor, Father Jean Pauline Lockulu, said parishioners are good about donating their services as well as staples like the fresh-caught Coho salmon that fills a freezer in the rectory guest quarters.

Contributing this story were Patricia Zapor in Greenwood and Manitowoc, Mark Pattison in Coppell and Nancy Wiechec in Klawock.