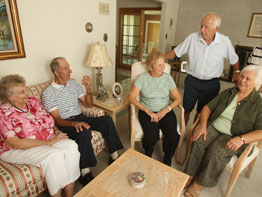 Joe Molino, a parishioner of Prince of Peace in Edgewood, cannot explain why the friendship he and his wife, Anna, have shared with seven other couples across the archdiocese has lasted as long as it has.

Mr. Molino called their enduring friendship, which began during the friends’ teenage years and has spanned more than 50 years, “very simple.”

“We all respect each other,” he said of the group, which includes couples attending Church of the Nativity in Timonium, St. Stephen in Bradshaw, Our Lady of Mount Carmel in Essex and St. Joseph in Fullerton. “We all like each other. We’ve never had arguments or fights, and we get along very well. And if someone needs some help with something, we’ll help them out.”

The friendship of these eight couples, now entering its sixth decade, was marked by humble beginnings, according to Joan Lesley.

“Years ago, it was not like now,” Mrs. Lesley said. “Our dating was curtailed to homes and inexpensive things. Anybody that opened their doors to us so that we could come in there on a Saturday night, we would go there. It was the fact that we were all together just having a good time. I think the kids today miss that.”

Their friendship endured military duty, as several of the men were deployed to the Korean War or Germany, said Lou Molino, Joe’s brother, who attends St. Joseph, along with his wife, Gina.

The friendship also lasted as the couples married and started families. Mrs. Lesley said that most couples have been married since 1955. Even as their families grew, they would get together regularly.

“In the wintertime, sometimes we’d get together and my husband would build a fire in the wheelbarrow, and the kids would go out and roast marshmallows and hot dogs,” she said. “They liked that. We’d take a walk through the woods, nothing that costs money, just very enjoyable. You could enjoy your time.”

Mrs. Lesley explained that many outsiders marvel at the group’s friendship.

“I’d say it’s a true friendship through all these years,” she said.

It has enriched their lives in more ways than one.

“There hasn’t been a divorce in the crowd,” Lou Molino said. “I think that’s wonderful.”

Mrs. Lesley believes the group has played a role in those marriages because, she said, “it’s good times and enjoying one another and being together in a fellowship.”

The group still gets together for cookouts and parties, said Joe Molino. Most recently, they were together for a crab feast and pool party in Perry Hall.

“Somebody will say, ‘Come on over,’ and we’ll have something and we’ll all get together,” he said.

The group has cruised to Hawaii and traveled to Italy.

“I think there’s just so much love there,” Mrs. Lesley said. “When you have people that love one another, it’s like a family. As you love your family, you love those friends that you’ve had for so long, and you cherish them. I’m a happier person having known them and being with them.”