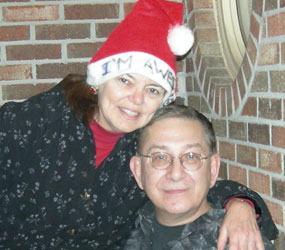 Alan Hahn was ready for a cooking challenge every Christmas Eve, as immediate and extended family would return home.

“Al was the chef,” Maureen, his wife, said. “He would make up the menu and was always trying to come up with something. We’re going to miss that.”

At 58, Alan died Oct. 14 at Timonium’s Stella Maris after a quick, intense battle with lung cancer. In his final days, Alan and Maureen’s relationship was crystallized. She saw a personal hero showing the way, no matter the circumstances.

As Christmas approaches, Alan’s legacy is coming into focus both in his family and the faith community of St. Ursula in Parkville. From Boy Scouts to youth basketball, Alan Hahn was well-known along Harford Road.

“He was a man who gave everything he had,” said Monsignor James P. Farmer, pastor of St. Ursula. “Alan just contributed so much to our school and parish.”

Sister of Notre de Namur Joan Kelly, of the Maryland Province, has known the Hahns for 24 years. She said the couple was deeply faithful and active in the parish’s pro-life activities.

Maureen is a seventh and eighth-grade-teacher at the school, while Alan served on the school board. Sister Joan named him president emeritus of that committee.

A native of South Amboy, N.J., Alan met Maureen (nee Hinke) while they were college students in Emmitsburg during the 1970s. Alan was attending Mount St. Mary’s University, while Maureen was attending nearby St. Joseph College.

“He was friendly, down-to earth,” Maureen recalled. ‘He seemed like a nice guy.”

Alan was a year older and the pair fell in love. Alan was so enamored that, upon graduation in 1973, he moved to the Baltimore area and started coaching basketball in Maureen’s home parish and school, St. Dominic in Hamilton.

They were married there in 1974 and he began coaching youth basketball.

In the early 1980s, the couple began a family and children Helen, Matt, Donnie and Liz were born. When the Hahns moved to the Parkville area, the children attended the parish school. Alan coached youth basketball there and helped make the annual March Madness Tournament there a marquee event.

The series of games became so synonymous with Alan that it was named for him just before his death. The announcement brought tears to his eyes.

The avid historian also led the Boy Scouts of St. Ursula Troop 26 on many historic trails through Gettysburg and Antietam. He also helped guide the school’s eighth-grade class on their annual retreat to the National Shrine Grotto of Our Lady of Lourdes at Mount St. Mary’s.

Professionally, Alan worked as a consultant for DP Associates in Towson from 1980 to 2000. He then worked as an independent consultant in the health care industry.

He used those skills to help St. Ursula, as he contributed his knowledge of finances and technology.

“He just liked sharing his talents,” said Maureen. “The school definitely grew during those years.”

Maureen, despite her presence as a teacher, was often overlooked for her numerous contributions, Sister Joan said. Maureen helped launch the computer program at the school.

“She certainly is the silent partner,” Sister Joan said. “She’s a marvelous teacher. She just sees what needs to be done and does it.”

Maureen said that she and her husband wanted to share their love of faith.

“Everything just revolved around the kids and St. Ursula,” she said. “We were tired sometimes, but it just became our way of life. We couldn’t think of a better place to be. I couldn’t imagine our lives any other way.”

Alan had been struggling physically earlier this year, but the family thought years of playing basketball had led to arthritis. A summer cancer diagnosis was a shock, however. Alan became reflective and prayed the rosary, and his spirit remained powerful.

Monsignor Farmer ministered to Alan as he neared the end of his life, something the priest called a “great joy.”

Maureen feels her husband now and can hear Alan teasing playfully her and the children.

“Boy do I miss that now,” she said. “I guess I always depended on him. His strength made me strong. I was just following his lead.”