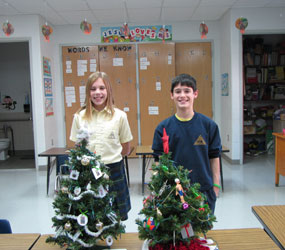 St. Joseph of Cockeysville sixth-grader Brendan Fritz recently made a Christmas ornament that features a person diving into a pool.

It’s in honor of a friend and schoolmate, Matthew Slattery, who suffered brain injuries after his family’s car was struck by a tractor-trailer in August. The Ohio crash claimed the life of the seventh-grader’s mother, Susan, and severely injured his brother, Peter. Peter is a student at Calvert Hall College High School in Towson and is mending.

Matthew is being treated at Baltimore’s Kennedy Krieger Institute.

“He’s a great person,” Brendan said. “He’s got so much potential.”

Brendan’s ornament has been placed on a two-foot tree covered in decorations made by fellow students in St. Joseph’s cooking club. The tree honoring Matthew will be among 600 decorated trees, wreaths and gingerbread houses that will be sold at the annual Festival of Trees, which benefits Kennedy Krieger.

The event, billed as the largest holiday celebration on the East coast, will be held Nov. 26-28 at Timonium’s Maryland State Fairgrounds.

Students from Catholic High School of Baltimore, Essex’s Our Lady of Mount Carmel and Parkville’s St. Ursula have also made contributions for the festival’s fairyland forest.

Matthew’s classmate, Megan Maher, regularly visits Matthew at Kennedy Krieger. She hugs the friend, known for his warm embraces, and strokes his hand. She remembers when the Slatterys moved from Alabama and how Matthew was a shy newcomer. He became everyone’s friend and eventually taught Megan how to ice skate.

“Everyone loves him,” she said. “He has always been there for everyone.”

She has made two ornaments, one celebrating Matthew’s humor and the other his love of swimming. Matthew, Megan and Brendan are all members of the same pool, Springdale in Cockeysville.

The group meets on Tuesday afternoons, making dishes to eat. She said the group decided to take part in the Festival of Trees after seeing the care Matthew received at Kennedy Krieger.

“Each ornament on the tree is unique and speaks of their experiences with Matthew,” Kleim said.

Kleim visits Matthew’s bedside and reads to him. Students visit as well.

“They come in and talk to him as if he would be able to answer them,” she said.

Kleim said St. Joseph has become stronger in the wake of the Slattery tragedy and rallied around Matthew and Peter’s father, Ed. Ed keeps supporters updated on Matthew’s status via a blog and welcomes St. Joseph students to Kennedy Krieger.

“He’s a very humble man,” Kleim said. “He has a fabulous sense of humor that he’s kept through this nightmare.”

Brendan and Megan believe Matthew will be playing with them soon.

Kleim prays for the best as well.

“My fondest hope,” she said, “is to say ‘Matthew, quit running down the hall!’ some day.”