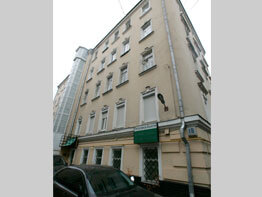 WASHINGTON – A Chilean priest who was friends with the two Jesuits murdered in Moscow expressed sadness and shock over their deaths.

“Everything is so weird,” Jesuit Father Tomas Garcia Huidobro told Catholic News Service Oct. 29. He is currently studying in Washington.

Saying he has “no idea what could have happened” to cause the murders of Jesuit Fathers Otto Messmer, 47, and Victor Betancourt, 42, Father Garcia noted that the work of the Catholic Church in Moscow “is very limited.”

Fathers Messmer and Betancourt were found dead late Oct. 28 in the downtown apartment. Father Garcia said that apartment contained nothing to rob.

Father Betancourt “really loved Russia. He was a regular person … a very good person,” he said.

“He didn’t do anything” to provoke his death, said Father Garcia.

When asked if the priests commented on Russian politics, Father Garcia said “no.”

“They didn’t say anything against Russia. They loved Russia,” he said.

The priests in Russia “are very careful” about relations with the Russian Orthodox Church and “try not to offend the Orthodox church,” said Father Garcia.

“Catholic priests working in Russia are so focused on working with (just) Catholics,” a small population of mostly foreigners in the country, he said.

In Rome, Jesuit Father Federico Lombardi, Vatican press spokesman, said in a note distributed to journalists Oct. 29 that authorities suspect Father Betancourt had been killed before Oct. 26, since he had not shown up to celebrate Sunday Mass that day.

Father Messmer may have been killed Oct. 27 since he had returned to Moscow from Germany that night, Father Lombardi wrote.

The funeral Mass for the priests was to be celebrated by Moscow Archbishop Paolo Pezzi the evening of Oct. 29 in Moscow’s Immaculate Conception Cathedral.

Father Messmer, a Russian citizen, was born in Kazakhstan. He had been head of the Russian independent region of the Society of Jesus since 2002.

Father Betancourt, an Ecuadorean citizen, studied in Argentina, Germany and Rome and had been working in Russia since 2001.

The two priests worked together at Moscow’s Church of St. Louis of France.