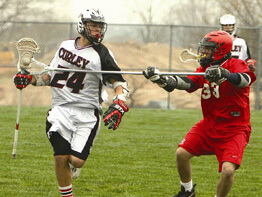 After a solid effort in 2006, the Friars were edged out of the championship game by a lone goal in the semis against Park School, Baltimore; but now in 2007, the Friars are on a tear, undefeated and looking again for title honors.

Out to a 7-0 start in the Maryland Interscholastic Athletic Association’s B Conference and 10-1 overall, the club that is grounded in physical and mental readiness every time they step onto the field has enjoyed a number of highlights.

“The highlight of our season had to have been the win over Dulaney, a perennial public powerhouse. They just were not ready for us,” said head coach Josiah LaTona who is in his seventh year with the team.

Further highlights include a win over The John Carroll School, Bel Air, and a 10-7 win over Park School.

On April 11, over spring break, the Friars hosted St. Francis High School, Buffalo, N.Y., a traditional road trip for the Franciscan school and one that usually boasts a road win, but not this year. The Friars bolted out of the gates with a quick score off of the very first face-off, took an early lead and never looked back, smoking their competition 16-3. This was the Friars’ first win over St. Francis and another example that the Friars are on a roll.

Now on the radar screen of the Metro Prep poll, 13th-ranked Curley is led on offense by two senior captains, Kenny Whittaker and Doug Herdigan. The left-handed Whittaker is a three-year starter and very physical to the goal. Herdigan, a two-year varsity player is leading the team in total points with a very physical approach to the goal and excellent stick skills.

Senior midfielder Brent Hooper, also a soccer phe-nom, controls the face-off and the play between the midfield lines.

Defensively, the team has been led by junior Dave Manik and seniors Eric Heitman and Greg Andrews. “Dave is a physical player and has excellent stick skills,” said LaTona. Manik will usually draw the toughest defensive assignment.
In the goal again this year is senior Ray Wodarski. With four years of varsity experience in the goal, Wodarski is having his best year yet.

Coach LaTona constantly talks to his team about the importance of execution and physical and mental readiness.

“We incorporate Jesus Christ into everything we do. To me, lacrosse is just another learning experience outside of the classroom. We’re educators not just coaches,” he said.