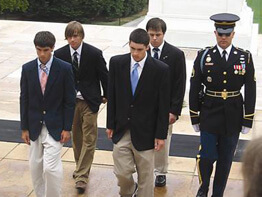 In a once-in-a-lifetime experience for the Archbishop Curley cross country team, four seniors took part in a wreath laying ceremony at the Tomb of the Unknown Soldier in the Arlington National Cemetery, Arlington, Va., on Aug. 16.
On that drizzly day, the four Friar senior runners, Tim Skarda, Pat Hairfield, Jonathan Sobczynski and Kevin Sommers, were chosen by Coach Gene Hoffman to serve as their four representatives to present the wreath, with 15 of their teammates on hand to line the walkway as “Taps” was played by the Honor Guard. But the weather had no bearing on the effect of this experience. Gene Hoffman, who is in his 31st year as head coach said, “To hear the Honor Guard announce that the wreath that honors this tomb was supplied by Archbishop Curley High School gave me chills.”
The Tomb of the Unknown Soldier, which is also known as the Tomb of the Unknowns, stands atop a hill overlooking Washington, D.C. Sculpted into the east panel which faces the city are three Greek figures representing peace, victory and valor.
Inscribed on the back of the Tomb are the words: “Here rests in honored glory an American Soldier known but to God.”
The Tomb is guarded 24 hours a day, seven days a week. In fact, there has been a Sentinel on duty in front of the Tomb every minute of every day since 1937.
Seniors Sobczynski and Sommers commented in tandem about the unique experience, saying, “This was a once-in-a-lifetime experience. It was just so cool.”
After the brief ceremony, the Friars changed out of their shirts and ties and into their running shorts and shoes to put in some road work around the Washington Monument and The Mall as the cross country season gets underway this week.
Reflecting on the experience days later, Coach Hoffman sat on a bench in the hallway of Curley with the typical noise and chaos of a fresh school year around him, and said, “I always try to remember that yes, we are coaches, but we are also teachers and more importantly we are out to create good citizens. This experience was incredibly touching and I thought our boys really needed to see this.”