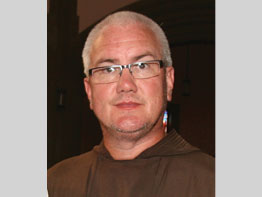 After robbers scaled a wall topped by a fence, kicked doors in, ransacked the place and terrorized an elderly friar, Father Paul Zaborowski prayed for them.

The St. Ambrose pastor asked parishioners of his Park Heights church to do the same after the 2:25 a.m. robbery on Oct. 18.

“Our prayer is constantly that they move from darkness into light and change their ways,” said Father Zaborowski, a Capuchin friar. “Folks come and they do their damage and they do their terror, but they’re still children of God. We just can’t give up on people, and Jesus never did.”

The robbers made off with Father Kozacheson’s laptop computer and wallet, containing $9 and credit cards, Father Zaborowski’s digital camera and three packages of fluorescent light bulbs.

After the robbery, the Knights of Columbus paid to have a security system installed.

To gain entrance to the friary, the robbers scaled a 12-foot barrier with a concrete base topped by a fence, then removed a second-story air-conditioner and broke in through a window. They kicked doors in, emptied drawers and shined flashlights into the faces of friars, none of whom suffered injuries.

The robbery gave the four friars who live at St. Ambrose empathy for so many victims in the crime-ridden neighborhood where violence, drug dealing and gangs run rampant, and hundreds of boarded houses and vacant lots pockmark the urban landscape.

“You know, the reality of the neighborhood came into our home and so now, the blessing is we certainly relate with the people we’re serving profoundly, because we know that fear and that terror,” Father Zaborowski said. “The most profound thing for us is just that we’re able to understand fully now the plight of the neighborhood.”

St. Ambrose runs a thriving parochial school and numerous outreach efforts. The parish also works with other churches and community organizations to improve the neighborhood, as well as with Auxiliary Bishop Denis J. Madden in the archdiocese’s efforts to stem violence.

As soon as gang graffiti reappears, as it has in recent days, the church sends somebody out to paint over it.

Recently, St. Ambrose began shining a spotlight on its belfry.

“You can see that tower now from all over the neighborhood,” Father Zaborowski said. “We as a parish often speak of ourselves as a beacon of light here. … We have to remember that Jesus is the light, and that’s our presence, our celebration of the Eucharist.”