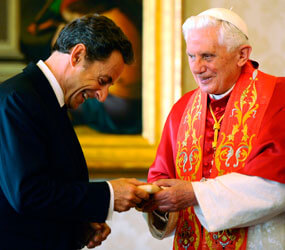 Sarkozy’s visit to the Vatican Oct. 8 came at a time when the French leader’s popularity is falling and in the wake of harsh criticism from some church leaders over his government’s proposals to deport some Gypsies.

The pope and president spent more than 30 minutes alone together before Sarkozy went on to a meeting with Cardinal Tarcisio Bertone, Vatican secretary of state, and Archbishop Dominique Mamberti, the Vatican’s foreign secretary.

A Vatican press release said the president’s discussions with the pope and with the Vatican’s foreign affairs experts focused on “themes of international politics, such as the Middle East peace process,” but also on the importance of dealing with the ethical dimension of the economy in the continuing attempt to address the global financial crisis.

After his meetings, Sarkozy went into St. Peter’s Basilica, where he waved to a few pilgrims on his way to pray briefly in the Blessed Sacrament Chapel and at the main altar of the basilica.

Sarkozy then joined French Cardinal Jean-Louis Tauran, president of the Pontifical Council for Interreligious Dialogue, at the altar of St. Petronilla, a martyr to whom the French have a special devotion.

During a prayer service, which included Scripture readings, Cardinal Tauran prayed that the French people and their leaders would have the courage and perseverance to work for “the absolute respect of human life,” for justice, employment, education and the safeguarding of the environment.

He also prayed that France would “welcome the persecuted and refugees.”