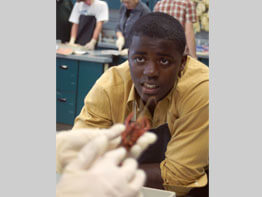 PORTLAND, Ore. – In the relative quiet of summer, Raphiel Lambert can imagine a parallel universe.

It’s one where he wastes his life on the streets of inner-city Portland. He walks aimlessly and hears people whisper: “He could have been something.”

But the 18-year-old escaped that fate eight years ago when he enrolled in Portland’s St. Andrew Nativity School. In June, he graduated from Jesuit High School, also in Portland.

The demanding academics and strong support at the two Jesuit-run institutions helped Mr. Lambert make it into college. This fall he will attend Idaho’s Boise State University on a full scholarship.

Mr. Lambert was a member of the first class from St. Andrew, a middle school that opened in 2001 for low-income students. Of the 19 students who finished at St. Andrew Nativity in 2004 and went on to Catholic high schools, 16 graduated this year. Four of them – Mr. Lambert, Tote Capuia, Jakub Forrest and Ramazan Muhammed – graduated from Jesuit High School.

These first Nativity students are pioneers. Everyone, including younger students, are looking to them to see if the model really works.

The school does not charge tuition. All students come from families that qualify for poverty assistance programs. Families pay a $25 monthly activity fee and contribute time at the school, which is financially supported by individual, family and corporate sponsors.

Around the country, Nativity schools have opened in low-income areas, offering a tuition free education to students. Some are operated by religious orders. About 92 percent of Nativity students finish secondary education, compared to the national rate of 50 percent for African-Americans and Latinos.

High school was not easy for Mr. Lambert. During his first two years at Jesuit, he “stumbled” in academics as he put it. He also said it took time to understand suburban white culture. He was one of only a handful of African-Americans on the school’s expansive Portland campus and even his sense of humor seemed a bad fit.

Mr. Lambert endured and then thrived because of his gregarious nature, his considerable skills as a running back and mostly the tenacious backing of faculty, staff, tutors and friends.

“No matter how mad and frustrated I got, they would keep on me,” he said.

His culture and the lives of others at Jesuit have now “meshed,” he told the Catholic Sentinel, newspaper of the Portland Archdiocese.