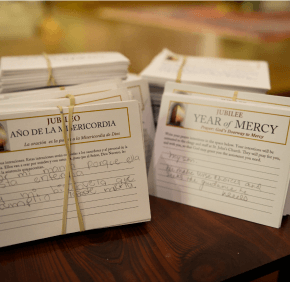 By Erik Zygmont
ezygmont@CatholicReview.org
FREDERICK – St. John the Evangelist parishioners don’t complain, but it’s not for lack of reasons, parish staff learned when they read their  prayer intentions
“It’s been a realization, in a new way and a pronounced way, what our people are carrying with them week after week and month after month,” said Father J. Kevin Farmer, the pastor.
He hoisted a cardboard box, overflowing with rubber-banded stacks of 3-by-5 cards on which parishioners had penned their intentions. They asked for help with health problems, with job loss and financial difficulties, and for their children who had left the church, to name a few.
“People are carrying some heavy, heavy burdens,” Father Farmer said.
They are a reason for the church’s existence, and certainly for Pope Francis’ Holy Year of Mercy. They are also the impetus behind the contemplative component of Walk-In Wednesdays, in which parish staff read and pray the parishioners’ intentions on Wednesdays from noon to 2 p.m. in the always-unlocked historic church.
The active component? While praying, staff make themselves available to parishioners and passers-by who wish to talk, vent or pray.
Father J. Kevin Farmer explains his parish’s unique activity for Pope Francis’ Holy Year of Mercy.

Father Farmer said the idea was teased out at staff brainstorming sessions. He kept remembering the words of Bishop Michael J. Byrnes, auxiliary bishop of the Archdiocese of Detroit, who, at a Lenten day of reflection, had counseled him and other attendees on methods of the New Evangelization.

While bringing non-, nominal or lapsed Catholics to Mass allows them to participate in a “deep, prayerful” experience, it could also be akin to “throwing them into the ocean without a life ring,” Father Farmer said, remembering the bishop’s talk.
The alternative, he continued, was to “create these shallow-water experiences,” such as Walk-In Wednesdays, “where people can dip their toes in.”
“It could be somebody angry with the church, distant with the church, or just somebody with a practical question they have not been able to get an answer for,” Father Farmer said.
Amy Spessard, the parish director of religious education, said that when she is on duty, people typically enter the church, find her and ask, “Are you the staff member I’m supposed to talk to?”
“Usually, I’ll start with prayer if it’s somebody I don’t know,” Spessard said, “because we have that common language.”
As with the prayer intentions, the people she meets are “surprising in their willingness to open up with regard to their struggles and the challenges they carry with them.”
Deacon Michael Currens said Walk-In Wednesdays have an integrating effect on a large parish with five weekend Masses, “almost like five little ecosystems within the parish.”
“It’s really great to be out here just to see people,” said the deacon, who takes a shift when he has time off from his day job.
Father Farmer noted that conversations during Walk-In Wednesdays take on a different tone than confession, which has long enjoyed popularity at St. John.
Meeting people in the openness of the sanctuary makes for a different dynamic, he said, as does the fact that he can take his time with a visitor, which is not so feasible when he’s faced with a 40-deep line of penitents.
Father Farmer enjoys taking his time, especially regarding the Holy Year of Mercy, which has deposited busloads of pilgrims – some from as far as California – before St. John’s Holy Door, one of eight in the Archdiocese of Baltimore.
“We’re going to take a whole year to talk about this thing – mercy – that is a tenet of our faith,” he said.
When the Holy Year ends Nov. 20, the parish will look for ways to use what it has learned from the prayer intentions and conversations.
“This might be one of those graced opportunities where our people are telling us what we need, and we need to work with that,” Father Farmer said.

Largest ever tour of St. Maximilian Kolbe’s relics begins in Archdiocese of Baltimore