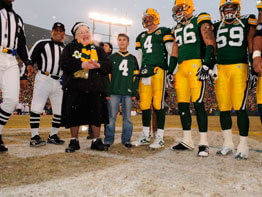 Her prize was to serve as honorary “G-Force Captain,” representing all Packer fans at the Jan. 12 playoff game against the Seattle Seahawks at Lambeau Field in Green Bay. Green Bay defeated Seattle 42-20 to advance to the NFL’s Jan. 20 National Football Conference championship game, also at Lambeau Field. She expected to repeat her honorary captain duties for that game.

“Looking up and seeing 72,000 fans and knowing you are representing them is a humbling experience,” Sister Sean Marie told The Compass, newspaper of the Green Bay Diocese.

She received two free tickets to the game, and took center stage during the coin toss when she accompanied the team captains to midfield.

Brett Favre was among the captains, and while Sister Sean Marie is a fan of the future Hall of Fame quarterback, she was even more thrilled to meet her favorite Packer on this year’s squad, wide receiver Donald Driver, who “seems like he is really a generous person,” she said.

In her essay, Sister Sean Marie wrote about how she has been a Packers’ fan since 1945. Her father introduced her to the game of football, and the “Ice Bowl”– a memorable Packer victory played Dec. 31, 1967, against the Dallas Cowboys – was the last game she attended with him.

In her essay she recalled that famous game.

“By then I was already a Manitowoc Franciscan Sister who did most of her play-calling from a chair near the radio or TV,” she wrote. “This game was a challenge. I was stuffed, long habit and full garb, into a sleeping bag up to my nose and almost bunny-hopped over the bleachers on the last play.”

Her father was in her thoughts during the Jan. 12 game.

“More than once I thought about him,” she said. “It was like this was planned upstairs. We didn’t know where our tickets would be. When we got to our seats, we were two rows down from where I sat at the ‘Ice Bowl.’“

Sister Sean Marie wrote in her essay that her “loyalty, enthusiasm, positive thinking and prayer for the safety of the players” qualified her to be an honorary captain. As a representative of the fans, she sought to meet as many as possible by walking around the parking lot and visiting tailgate parties prior to the game.

“They (fans) were so warm and receptive,” she said. “Some told me they voted for me. Some told me they read my essay. I got the warmest reception. After the game, some fans wanted pictures with me.”

A member of the Franciscans in Manitowoc since 1960, she has been a teacher and a principal. She is now in semiretirement at the convent, she said.

“We (sisters) don’t retire,” she said. “We redistribute energy.”

She stays busy as a mentor, teaching English as a second language, and participates in Touchstone, a program involving visits and letters to retired priests and religious now living in nursing homes and assisted-living facilities.

Bart Starr is her all-time favorite Packer. Starr, the team’s quarterback from 1956 to 1971, and his wife, Cherry, actually visited her family’s home.

“My dad was the PR guy for the Packers in Plymouth (Wis.),” she said. “This was back in one of Bart’s first years with the Packers. He came to town to give a talk, and afterwards he and Cherry came to our house. My dad kept up with him over the years at Christmas. I saw him from time to time.”

Sister Sean Marie predicted a victory for the Packers over the New York Giants on Jan. 20.

“I think both teams are on a roll,” she said, “but if everybody plays to the best of their abilities, I think the Packers will take it because of the home-field advantage.”