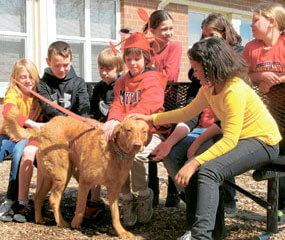 GAMBRILLS – As a third-grader last year at School of the Incarnation, Regan Zeeser watched with curiosity and a tinge of jealousy as its fourth-grade classes celebrated Maryland Day.

She finally had her chance to rejoice with her classmates March 25, when the state honored the 1634 landing of the Ark and the Dove in St. Mary’s County. The entire Incarnation community joined the celebration this time, as students at the inter-parish Catholic School in Anne Arundel County were out of uniform and wearing the state colors of red, gold and black.

“It’s pretty cool to celebrate everything about your state and learn more about it,” Regan said. “I think the history here is pretty awesome. A lot of the firsts (in the United States) happened right here.”

Much of the Maryland Day activity at School of the Incarnation continues to revolve around fourth-graders, such as Regan, who read a poem she wrote about the state in front of the entire school community.

Over the last few months, the fourth-graders studied a Maryland text book and had lessons in the topography, ecology, environment and history of the state. During the school year, the fourth grade went to St. Mary’s County, where it viewed a replica of the Dove.

Students also learned about the historical significance of individual counties. Fourth-grader Emidio Bucci was charged with studying Cecil County. On a visit there, he saw a wild bald eagle and a lighthouse.

The school’s Maryland Day activities coordinator was fourth-grade teacher Betsy Werthmann, a native of the Midwest.

“I thought we all need to celebrate our state because there are so many great things about it,” Werthmann said. “It’s fun and the kids are having a great time.”

During the latter part of the day, various interactive stations were set up for the fourth-graders. Students learned about lacrosse, Chesapeake Bay retrievers, jousting and square dancing. They planted the state flower, the Black-eyed Susan, and saw a live Maryland terrapin.

Emidio, meanwhile, said his appreciation of Maryland has grown.

“We’re so close to everything,” Emidio said. “We have the Ark and the Dove in St. Mary’s City. We have Washington, D.C., and Baltimore right here. We have everything.”

Added classmate Michael Gardiner: “I hope I live here all my life.”