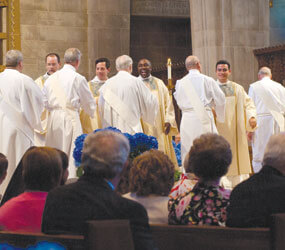 Processing up the long aisle at the Cathedral of Mary Our Queen in Homeland May 21, four white-robed men beamed with the knowledge that they would soon be ordained to the transitional diaconate.

It was a long journey for all of them, with two coming from other countries and the others hailing from different states. Answering the call to religious life for the Archdiocese of Baltimore brought them to the same place on this joyful day, however, and their ordination as transitional deacons was one of their last steps before they will eventually be ordained to the priesthood.

“I feel very blessed by God for this beautiful gift,” said Rev. Mr. Jaime Garcia-Vasquez, a 27-year-old native of Colombia, just moments after his ordination.

“No one is worthy of it,” he said, “but, humbly, we just accept it because we are called. We hope that the people of God will pray for us and that God will give us the strength and the gifts to be able to endure and to obey his commandments – to try to bring that closer to the people.”

Archbishop Edwin F. O’Brien, in solemn rites that stretch back centuries, ordained Rev. Mr. Garcia-Vasquez, Rev. Mr. Stephen Cotter, Rev. Mr. Isaac Makovo and Rev. Mr. Steven Roth to the transitional diaconate. As deacons, the men will proclaim the Gospel, preach homilies, perform baptisms, witness weddings and assist in other liturgical functions. They will serve in parishes throughout the archdiocese.

During a liturgy that attracted hundreds of people, the men made promises of celibacy and affirmed their obedience to the archbishop and his successors. In an expression of their total dependence on God, they prostrated themselves in the sanctuary as the assembly chanted the Litany of the Saints.

The new deacons were invested with the stole and dalmatic, signs of their office. The archbishop presented each a Book of the Gospels, urging them to “believe what you read, teach what you believe and practice what you teach.”

At the rite’s conclusion, the archbishop extended the kiss of peace to the new deacons – an action repeated by other deacons present for the liturgy.

In his homily, preached in English and Spanish, Archbishop O’Brien said the laying on of hands and the prayer of ordination transformed the men into the likeness of Christ – “the deacon, the servant.”

“Your ordination will characterize you, indelibly etch into your very being,” the archbishop said, “the one who identified himself, indeed defined himself a deacon, a member of the servant class – ‘I have come to serve and not be served.’”

Rev. Mr. Makovo, 34, called the laying on of hands one of the most moving parts of the ceremony.

Rev. Mr. Makovo came to Baltimore from the Archdiocese of Mombasa in coastal Kenya. His ordination to the diaconate was another confirmation that he made the right decision to answer the call to service outside his homeland.

As Rev. Mr. Cotter, 35, processed into the cathedral, his path to that moment was very much on his mind.

“I’ve been in formation for 10 years on and off,” he said after his ordination. “It’s been a long journey. That’s what I was thinking about. It’s an unbelievable day.”

Rev. Mr. Cotter, whose sibling is a Nashville Dominican sister, called it a “great honor and privilege to be able to serve the people of God at the altar of God.”

A native Oklahoman, Rev. Mr. Cotter joined the U.S. Army as a chaplain assistant a few years after graduating from Franciscan University in Steubenville, Ohio. He served two tours in Iraq. He is being co-sponsored by the Archdiocese for U.S. Military Services and will serve as a military chaplain and a priest for the Baltimore archdiocese after his priestly ordination.

Rev. Mr. Roth, 32, a Pennsylvanian, learned about the Baltimore archdiocese after encountering seminarians from Baltimore. Ordination to the transitional diaconate was “an overwhelming experience,” he said.

“It’s just a fantastic day,” said Rev. Mr. Roth, a former college professor who holds a master’s degree in community counseling and who has completed clinical work in child psychology and medical oncology. “It’s as though God is calling you to do something great for the church of the Archdiocese of Baltimore.”