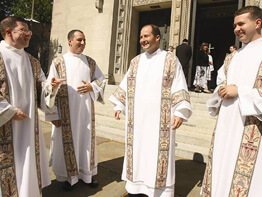 When Jesse Bolger was an infant, his musically inclined parents would occasionally place their son in a guitar case on the church altar while they practiced.

On June 23, Barbara and Brian Bolger’s son was once again on the altar – this time being ordained a priest for the Archdiocese of Baltimore.

“It’s a leap of faith, I’m walking out on the water as Peter did,” said Father Bolger before the ordination Mass began. “I feel good, I’m at peace. God has called me.”

Father Bolger said this is a very special day not only for him but for his whole family.
“I got a great night’s sleep,” said Father Triplett to Father Goulet while standing in the sacristy before Mass. “I’ve been working at this for 10 years. It’s nice to finally be here.”

Cardinal William H. Keeler, who underwent brain surgery June 18, was at The Johns Hopkins Hospital in Baltimore recovering and unable to attend the ordination. From his hospital bed, he recorded a message to the four men to be ordained, which was played at the beginning of the Mass.

“There is no greater joy and no greater privilege for a bishop than to ordain new priests of Jesus Christ,” Cardinal Keeler said.

He congratulated the candidates on all their hard work and he acknowledged all of the love and support of the candidates’ parents, teachers, mentors and fellow priests.

“On this most special day in your lives, I am thinking of you with great pride and great hope,” said the cardinal. “May you always be aware of the support and example of your brother priests, who serve the Lord and our people with great devotion. And may God bless you today and every day of your priesthood.”

As the congregation knelt down and softly sang the Litany of the Saints, the candidates lay prostrate in front of the altar in an act of humble prayer and an expression of their total dependence on God. After each of the bishops and 96 priests laid their hands on each of the candidates’ heads, the newly ordained priests were invested with a stole and chasuble, the signs of the presbyteral office, by a priest of their choice who has been influential in their vocation.

“Each of you by your priestly presence will make a difference,” said Bishop Malooly during his homily. “Pope John Paul II at the time of the millennium wrote that ‘All initiatives should be set in relationship to holiness. It expresses best the mystery of the church without the needs of words.’ Be holy men.”

Bishop Malooly encouraged the newly ordained to “look at others with the gaze of Jesus.”

“When people come to you let them see Jesus in you,” Bishop Malooly said to the new priests. “Strengthen that oneness with Jesus through daily Eucharist and prayer before the Eucharist. Be holy, be joyful, be the face of Jesus.”

As the Mass came to a close and the newly ordained descended down the middle aisle, the congregation broke into cheers and claps of joy for the new priests. Father Foppiano said while walking out of the Cathedral he heard many people calling him his name and it was the first time he had been called “father.”

“It’s sort of unbelievable because it happens so fast,” said Father Foppiano. Father Goulet said “It’s exciting and very joyful. There are no words to explain it.”

Each of the new priests said they were looking forward to celebrating Mass and the sacraments on their own. Father Goulet, who after three years in the diocese will be placed as a U.S. Army chaplain, said he can’t wait to take care of the soldiers and their family’s spiritual needs.

“This is another task he set out to do and accomplished,” said Paul Goulet, father of Father Goulet. “He knew what he wanted to do. We weren’t surprised when he said he wanted to be a priest.”

Father Gerard Francik, director of vocations, said in a way he felt like a proud father as he witnessed the transformation of the candidates. He said he hopes these young men will be as happy in their vocation as he has been and that the good days will far outnumber the bad ones.

“We have new, young leaders who are filled with life, who are filled with energy and filled with commitment,” said Father Francik. “They are ready to evangelize and spread the Gospel and they serve as great models for young people who may be thinking about it. God will use each of their gifts in varies ways.”

With tears forming in the corners of her eyes, Father Foppiano’s mother, Janet Foppiano, said that her son would always be the one pushing them to go to all the big church events and around Christmas and Easter he would draw pictures of the altar and church.

“I couldn’t be more proud of him,” said Father Foppiano’s brother, Edward Foppiano in a thick New York accent. “I just know of all the people, Michael will be able to serve the community of Baltimore proudly and they are very lucky to have him.”