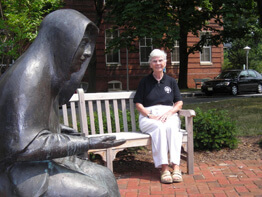 When Sister Kathleen Feeley, S.S.N.D., was an English professor and president of the College of Notre Dame of Maryland, getting around the leafy Baltimore campus involved little more than a leisurely stroll from the convent.

Now that she’s a professor at Catholic University College of Ghana in Sunyani, Ghana, the sprightly 78-year-old sister confidently navigates dirt roads in a large open-back truck for the 30-minute daily roundtrip commute to the university. She learned to work the gears soon after arriving in Africa.

“The roads are not good,” said a smiling Sister Kathleen, noting that while Ghanaian main streets are paved, the side streets are not.

“When it’s the rainy season and you have ruts and water streaming through, it’s not easy to drive,” said the Baltimore native who grew up in Ss. Philip and James, Homewood. “It’s a lot different from driving on Charles Street.”

Sister Kathleen isn’t complaining. She likes a challenge. That’s why she’s in Africa.

In a June 27 interview at Notre Dame while on a three-month break from her teaching duties overseas, Sister Kathleen told The Catholic Review how teaching in Africa has changed her. Her view of Catholicism has expanded, she said, and she has been inspired by working with young people who have a tangible thirst for knowledge.

For the past four years, Sister Kathleen has taught remedial skills and theology at the newly launched African university, the first Catholic university in Ghana.
The highly regarded educational leader, who stepped down as president of Notre Dame in 1992 after 21 years, left a comfortable position teaching English at the Baltimore college because she felt God calling her to something new, she said.

“I had an overdose of comfort and security,” the white-haired woman explained with a laugh.

Most of Sister Kathleen’s students are the first in their families to attend college, she said. Many lack fundamental writing skills and it’s her job to get them up-to-speed.

The English professor encourages reading and works on basic grammar and composition skills with her students. She maintains a small, donated library of used books and encourages young men and women to enjoy novels with strong themes of right and wrong – an idea that brought some initial resistance. One man was incredulous that his university professor wanted him to read “mere storybooks,” remembered Sister Kathleen, who had once been tapped by Baltimore Mayor Kurt Schmoke to serve as the city’s special education czar.
“I said, ‘Yes I do,’” she said. “It expands horizons.”

Established by the bishops of Ghana, Catholic University College of Ghana is currently located in a diocesan pastoral center. Construction on a permanent campus began in March, according to Sister Kathleen.

The majority of the coeducational school’s 500 students are Christian, representing Catholic, evangelical and charismatic traditions. They are deeply devoted to their faith, Sister Kathleen said, and they interject references to God into everyday conversations.

“I love the sense they have of living in a spiritual world,” she said. “It’s a quality I hope they keep.”

While the students know the Bible well, Sister Kathleen said she tries to gently introduce modern ways of interpreting the Scriptures.

“There is a tendency toward literalism,” said Sister Kathleen, one of only two white people on the faculty. She lives with three School Sisters of Notre Dame involved in other educational ministries.

Sister Kathleen encourages students to see the stories of the Bible as vehicles for transmitting greater theological truths about the nature of God and his relationship with humanity.

Citing the two conflicting creation stories in Genesis, Sister Kathleen asks students to consider the meaning behind the stories.

“It’s very holy ground and I walk on it very carefully,” she said.

Masses in Ghana are “wonderful” celebrations of faith, filled with music and colorful processions, according to Sister Kathleen.

In addition to teaching at the university, Sister Kathleen works with novices from all over Africa who are preparing to become School Sisters of Notre Dame.

Working in Ghana has taught her to be more reliant on the Holy Spirit, she said. It’s also given her a deep appreciation of her religious order’s understanding of transformation.

“Being transformed is more than being your best self,” she said. “It’s being the self you never knew you could be.”