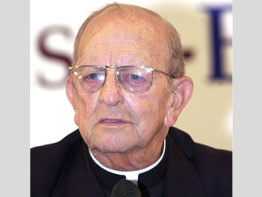 WASHINGTON – When it became public Feb. 4 that Legionaries of Christ founder Father Marcial Maciel Degollado had fathered a daughter, the order’s former communications director decided he had to apologize for having defended him after sex abuse allegations against the priest first became public in 1997.

Four days after the news broke, Jay Dunlap used his blog to apologize to those who said they had been sexually abused by the priest and to the people he said were “misinformed by statements I made” defending Father Maciel.

On Feb. 4 Legionaries of Christ officials said they only recently learned their late founder had fathered a child. In the past, Father Maciel had been accused of sexually abusing young seminarians in the order.

A spokesman for the order in Rome said the allegations “have never been proven definitively,” but Mr. Dunlap told Catholic News Service Feb. 10 that “in my conscience I had to come forward to apologize to any victim who was being denied or doubted.”

“Given the Holy See’s determination that it appears some of the allegations are credible, I felt a moral obligation (to apologize),” he said. “Because we were going with the best information at the time, there was no reason to question the credibility. I was the spokesman out front saying otherwise.”

Mr. Dunlap was hired as the Legionaries’ first communications director in March 1998, 13 months after published reports detailed allegations of sexual abuse against the Mexican-born Father Maciel. Mr. Dunlap said in his blog that he was hired “to help respond to the furor” the allegations raised.

He said in his blog that the Legionaries had prepared a 32-page executive summary making the case for Father Maciel’s innocence and distributed it to church hierarchy, most notably bishops.

“Suffice it to say that, while there always remained some holes in the argument, there seemed to be adequate evidence to support these claims,” Mr. Dunlap said in his blog.

(In the Archdiocese of Baltimore, the Legionaries and their lay branch, Regnum Christi, are involved in the operation of the Woodmont Academy in Cooksville. Last June, Archbishop Edwin F. O’Brien met with the Legionaries to discuss what he described as a “lack of transparency” regarding some of their programs.)

In Rome, Father Paolo Scarafoni, spokesman at the Legionaries’ headquarters, told CNS Feb. 4 that the accusations “have never been proven definitively.” Despite the late priest’s failures and flaws, he said, members of the order are grateful to him for having founded the order and its various ministries.

“It is now clear,” Mr. Dunlap concluded in his blog, “that Father Maciel did in fact abuse his power and abuse young people in his charge.”

Father Maciel died Jan. 30, 2008, at the age of 87. After its own investigation concluded in May 2006, the Vatican decided against conducting a canonical trial, but rather ordered the then-frail Father Maciel to withdraw to a life of prayer and penance.

Mr. Dunlap left the Legionaries in 2006 and now is a teacher at Sacred Heart Apostolic School in Rolling Prairie, Ind., and an assistant professor of communications at Mater Ecclesiae College in Greenville, R.I. The college is a Legionaries-sponsored formation center for consecrated women.

“(I feel) grief. (I’m) trying to understand,” he added. “A number of people compared” the news about Father Maciel, he said, to hearing that “your father was not the man he appears to be.”

“Where I think it’s been a problem is where it’s gotten in the way of thinking clearly and how you run your systems. And if something’s broken and you won’t change it because of who put it in place, that isn’t judicious,” he explained.

“I think the main thing that has to happen is to make sure that whatever enabled the founder to hide what he did has to change,” he said.

Legionaries of Christ Father Thomas Berg, founder and senior fellow at the Westchester Institute for Ethics and the Human Person, accused his superiors of ineptness for failing to adequately respond to the revelations about Father Maciel.

“I … beg (your) forgiveness for the disastrous response which this crisis has received from our upper LC leadership,” Father Berg wrote Feb. 8 in an emotional letter to members of Regnum Christi, the Legionaries’ primarily lay affiliate, that became public two days later.

Sponsored by the Legionaries, the institute researches and analyzes contemporary moral issues. It is based at the order’s retreat center in Thornwood, N.Y.

“There is no other way to say it: In so many respects, Legionary superiors have failed, and failed miserably to respond adequately to the crisis, and not surprisingly, have engendered in many of you an understandable lack of confidence,” Father Berg’s letter said.

But the priest also acknowledged that the Legionaries’ leadership “in their hearts are trying to do the right thing, under inhuman pressure.”

A 23-year member of the Legionaries, Father Berg said he often had “gone out on limb after limb trying to defend Maciel.”

“I have lived my priesthood always with that cloud hanging over me, always having to essentially apologize for being a Legionary. … I can only say that the rage and raw emotions that I have felt these past days … are only a glimpse of the unspeakable hell that victims of priest sexual abuse must go through,” he wrote.

The letter made no reference to Father Maciel’s relationship with a woman or the daughter – said to be in her early 20s – that he fathered with her. However, in a shorter statement posted on the Westchester Institute’s Web site Feb. 6, Father Berg said an internal investigation by the order revealed that Father Maciel had a daughter.

Father Berg did not return calls from CNS seeking comment.

Calls and e-mail messages from CNS to several Legionaries priests across the country and in Rome were not returned or the reporter was referred to the order’s current communications director.

However, one Legionaries priest, who asked only that his first name be used, told CNS that “everyone’s in praying-and-thinking-about-it mode right now.”

“The news is sad for all of us; we’re very sad,” said Father Joseph from the order’s novitiate in Cheshire, Conn. “But at the same time we have a lot of faith in Christ that he’s asked us to give our lives to save souls, to bring Christ to the world.

Meanwhile, Dunlap’s blog post found its way to journalist Jason Berry, who for more than a decade has chronicled sexual abuse allegations against Father Maciel and the influence the Legionaries order has gained within the Catholic Church. Berry welcomed the statement and said he hoped to discuss it with Dunlap.

“What is so striking about this is that people who wanted to say Maciel was so wrongly accused now are offering their apologies,” Berry said about the statements from former and current Legionaries officials.

“I’m encouraged by it,” he added. “It’s a sign of the split within the Legion.”