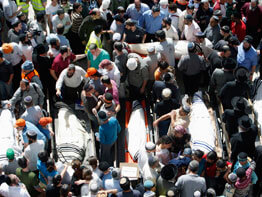 JERUSALEM — A Palestinian gunman’s attack on a Jewish seminary was a “monstrous” atrocity, said a former director of Jerusalem’s Franciscan seminary.

Father Artemio Vitores, vicar of the Franciscan Custody of the Holy Land, told Catholic News Service he has lived through five wars and two Palestinian uprisings in the Holy Land, but the attack on the seminary, or yeshiva, affected him on a more personal level.

“Seminaries have another atmosphere, whether they are Jewish or Christian students. They are young students dedicated to their religious studies,” he said March 7, the day after the attack. “We have to avoid hate. That is not taking us anywhere.”

A Palestinian gunman opened fire on a crowded library and study hall of the Mercaz Harav Seminary, killing eight people, ages 15-26, and wounding 11 others. The seminary is home to several hundred students and is the flagship seminary for the religious Zionist movement, which advocates placing Jewish settlers in Palestinian territories.

The Israeli Foreign Ministry said the Galilee Freedom Brigades — an Israeli-Arab group — has claimed responsibility for the attack, which came just after U.S. Secretary of State Condoleezza Rice’s visit to the Holy Land.

However, Wadie Abunasser, director of the International Center for Consultations and a Catholic resident of the northern city of Haifa, said he doubted Israeli Arabs would have undertaken such an attack. He said for several years Israeli security forces have been trying to determine whether an Israeli-Arab terrorist cell exists in Galilee, but they have not uncovered anything.

Nevertheless, he said, such a claim may have negative effects on the Jewish Israeli attitude toward Arab residents of Israel in the long run. He said the rising trend of the idea of transferring the Arab population into Palestinian-controlled territories — which some radical Israeli parliament members have proposed recently — could gain more support among Jewish Israelis.

Media reported the streets of Gaza filled with crowds passing out sweets and armed men firing in the air in celebration following the attack.

The Islamic militant group Hamas, which controls the Gaza Strip, issued a statement saying the group “blesses the (Jerusalem) operation. It will not be the last.”

At the time of the explosion, Gaza had been under Israeli military attack for a week, and more than 110 Palestinians had died during violence on the southern border, where Palestinian militants have been launching Qassam rocket attacks into southern Israeli towns. Abbas, whose Fatah Party was ousted from Gaza by Hamas last summer, suspended peace talks with the Israelis March 2 after the Israeli incursion.

Father Vitores said the positive peace ideas discussed in recent times have not yet come to fruition, but Palestinians and Israelis need to put their wounds aside and continue with the process of working toward peace.

He said he participated in a meeting with Abbas several months ago and was impressed by the president’s optimism.

“There were some good ideas coming from this land where there is continuously war,” he said. “In the heart of the people there is a desire for peace. That is not an impossible or radical hope. But for that there must be tolerance and acceptance.”

Father Vitores said he knows from experience that, eventually, talks will resume and everyone will have to make compromises.

“They have to reach the point where they accept the other,” he said. “They may not become brothers, but at least there will be tolerance.”

Father Vitores said he had spoken to a group of visiting nuns who were worried about visiting the Via Dolorosa — the traditional route of Jesus’ Way of the Cross — the morning following the attack. He said he told them that as Christians they were called to walk along that path, to continue visiting the holy places, and then in time other people, too, would follow them along their path of peace and tolerance.