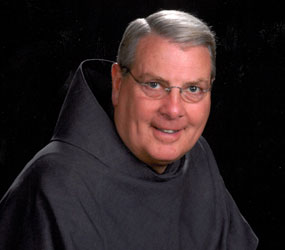 Conventual Franciscan Father Gregory Hartmayer, principal of Archbishop Curley High School during the mid-1980s, has been named Bishop of the Diocese of Savannah in Georgia.
A Curley spokesperson said Bishop-designate Hartmayer, who is currently pastor of St. John Vianney Parish in Little Springs, Ga, is the first person associated with Curley in its 51-year history to be named a bishop. Pope Benedict XVI accepted the resignation of Bishop J. Kevin Boland, 76, and appointed Bishop-designate Hartmayer to the post July 19.


“As you can imagine, since I received word that His Holiness Pope Benedict XVI appointed me the 14th Bishop of the Diocese of Savannah, my head and my world have been spinning in opposite directions,” Bishop-designate Hartmayer said in a statement. “I am extremely grateful to Pope Benedict for his confidence in me as the new Bishop of Savannah.”


Bishop-designate Hartmayer is a native of Buffalo, N.Y., who was ordained for the Conventual Franciscans in 1979 after studying at the order’s novitiate in Ellicott City. He holds a bachelor’s degree in philosophy from St. Hyacinth College and Seminary in Massachusetts and three master’s degrees: in divinity from St. Anthony-on-Hudson in Rensselaer, N.Y., in pastoral counseling from Emmanuel College, Boston and in education from Boston College.


“For almost 800 years, the Franciscans have been preaching about the love and mercy of God,” Bishop-designate Hartmayer said in his statement. “This friar and son of St. Francis will continue that mission of evangelization here as Bishop of the Diocese of Savannah.”


He was principal of Curley, which is administered by the Conventual Franciscans, from 1985 through 1988. During that time, Curley celebrated its 25th anniversary. He returned to the school as it marked its 50th anniversary during the last year. Bishop-designate Hartmayer was instrumental in developing a longer range view for the alumni association at Curley. Physical expansion and the further development of fine arts and music programs also took place.


Father Joseph Benicewicz, president of Curley, has known the soon-to-be bishop since the late 1980s and early 1990s. He served as assistant principal under then-Father Hartmayer at St. Francis High School in Athol Springs, NY. At the time, Bishop-designate Hartmayer was principal of the school.


“He’s a very personable, very affable man,” Father Benicewicz said. “He is very welcoming of people. I think his model of how he administers is one of collaboration. He works well with people.”


There is just one other Conventual Franciscan priest serving as a bishop in the U.S. – Bishop William P. Callahan of the Diocese of La Crosse in Wisconsin. The latest announcement is a point of pride for the order, Father Benicewicz said.


“We joy join in prayer for him as his responsibilities certainly increase considerably,” the Curley president said.


A similar joy is overflowing at Curley, as the intuition remembers the former principal.
“We take great joy in the success of anyone associated with the school,” Father Benicewicz said. “To have a former principal now become a bishop is great source of pride for the school. The whole community will certainly be wishing God’s blessings on him.”