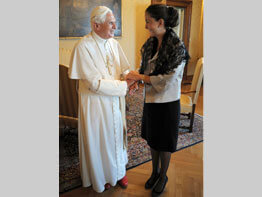 Her voice still breaking with emotion a few hours after meeting the pope Sept. 1, Ms. Betancourt said she was fairly certain she broke Vatican protocol “because as soon as I went in, I hugged the pope and maybe I wasn’t supposed to do that.”

Ms. Betancourt, a former presidential candidate in Colombia, was freed by Colombian rebels in early July after more than six years as a hostage.

Immediately after her release she had said she wanted to meet Pope Benedict to thank him for his prayers and public appeals for her release.

Along with her mother, sister, her sister’s children and a cousin, Ms. Betancourt spent 25 minutes with the pope at his summer villa in Castel Gandolfo. She spoke afterward at a press conference in Rome.

“Her period as a prisoner was a time of great spiritual experience, of prayer, and so she really wanted to tell the Holy Father about the importance faith played in sustaining her during that very difficult period,” Father Lombardi said.

Ms. Betancourt told reporters that during the audience she and the pope prayed together that God would “touch the hardened hearts, the cruel hearts” of the members of the Revolutionary Armed Forces of Colombia, or FARC, who continue to hold dozens of hostages.

She used the press conference to speak directly to her kidnappers: “The world is watching you. Open your hearts to something more than political and military calculations. Make room for peace in your minds.”

Ms. Betancourt told the press that the pope listened to her story about her captivity and the sustenance she got from prayer and from reading the Bible, helping her see how sharing the story could benefit others.

“When I was in the jungle, they forced us to march from dawn to dusk, we were exhausted,” she said. One day, at the end of a long trek through the jungle, “finally in my hammock, feeling deeply anguished, I turned on the radio and I heard the voice of the pope saying my name. It was like a light and that is why, since the day of my liberation, I wanted to meet and embrace him.”

She told reporters she and the pope also spoke about the Bible.

“Our pope is an immense, immense researcher and scholar of the Bible, this extraordinary instrument we have. Speaking with him, we concluded that it is necessary for people to know what the Bible is. For many people it is a dusty book that smells of mildew,” she said.

“I had never read it before my kidnapping,” Ms. Betancourt said. “In the jungle I read it and re-read it and found the answers to everything. It’s a great book.”