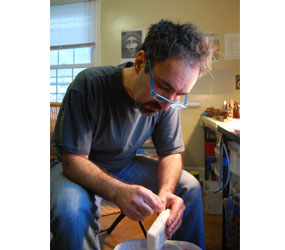 WATERBURY, Conn. – During his 27 years building Broadway and movie sets, Ron Daisomont learned how to work with wood, metal and a variety of other materials. But with tight deadlines, patience was not his strong suit.

Now, he is working with a new material, and he is learning patience. His art is biblical sculpture. His medium: bars of Dial soap.

You might say he has cleaned up his act.

“I used to work for Scenic Technologies, out of New Windsor, N.Y.,” he said. “I worked on all the major Broadway shows, including ‘Cats,’ the original ‘Les Miserables,’ the original ‘Phantom (of the Opera)’, and a lot of road shows.”

Four years ago, he fell at a train station and fractured several bones. It put him out of commission, and made him look for other ways to use his talents. About a year ago, he found a way.

“A friend of mine took a bar of soap and carved a hand. He took another and carved another hand, so he had praying hands,” Daisomont said in an interview with The Catholic Transcript, Hartford’s archdiocesan newspaper. “He put them on a base. I said, ‘Gee, I could probably do that.’ So, the next day I actually started carving crosses, and God gave me the name of it: Crosswerks Ministries.”

Presumably, God spelled it correctly, but a computer search told Daisomont that there were some 1,900 companies with “Crossworks” in their names. So he settled on “Crosswerks.”

Daisomont’s soap sculptures range in size from about 4 inches high and a few ounces in weight to nearly a foot high and weighing about three pounds. Some large pieces give a new meaning to “eight to the bar.”

Biblical scenes include King David’s golden harp, for which Daisomont uses dental floss for the strings; Noah’s ark, both during the flood and after landing on Mount Ararat; chariots with wheels that actually turn on axles fashioned from pen cartridges; crosses and crucifixes; chalices; gates of Samson; and more.

Does it matter which kind of soap he uses?

Daisomont discovered that a 3.2-ounce bar of Dial is dryer than most other brands and easier to work with. “I’ll go to a dollar store and buy like 16 bars at a time, three bars for a dollar. Ten days ago I bought 62 bars, and I think I have a dozen left,” he said. He saves all his shavings and molds them into tiny swords, helmets, shields and bases for his sculptures.

To join several bars, he will use a carpenter’s lap joint, fit them together, pour hot water over them, drain the water and press the bars together until they are fused.

The only paint that he uses is gold paint for the chalices and David’s harp. “Anything that’s brown is instant coffee,” he said. Other colors are achieved by shaving colored pencil leads and mixing them with a special floor wax, letting it set, and then applying the mixture with a Q-tip.

Using a few simple tools, he is able to achieve the look and texture of wood, marble, granite and other materials. But, he doesn’t take credit for it. “It’s all the work of the Holy Spirit,” he said.

“I was a carpenter for many years and a certified welder, but I have absolutely zero training in art,” he said. “Doing these sculptures is like putting plastic models of cars together, except there are no directions. The Holy Spirit is my direction.”

Daisomont, who attends St. Michael Church in Waterbury, hopes to form a nonprofit organization, build a website and sell his sculptures at church bazaars to raise money for Catholic causes. Until then, he is stockpiling his art and selling it piece by piece.