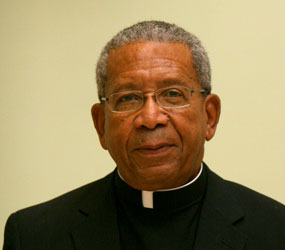 Josephite Father William L. Norvel has become the first African-American to lead the Josephite priests and brothers in the Baltimore-based order’s 140-year history.

Founded to serve African-American Catholics, the Josephites minister in seven states and the District of Columbia.

“Having more black leadership in the church is fulfilling the dreams of many,” said Father Norvel, a 76-year-old former pastor of St. Francis Xavier in Baltimore. “My election shows that the Josephites feel that it’s time that we have black leadership and they will support it.”

Father Norvel, currently pastor of Our Lady of Perpetual Help in Washington, D.C., was elected during the Josephites’ quadrennial General Conference June 13-17 at St. Joseph Seminary in Washington. His term runs for four years.

A native of Pascagoula, Mississippi, Father Norvel is the 13th superior general to lead the Josephites.

In the coming years, he said, the Josephites will be considering ways to increase vocations, campus ministry opportunities, reviewing the Josephite Pastoral Center and helping to strengthen parishes.

Father Norvel has been a leader in bringing African-American spirituality into liturgy in the United States.

“My thrust in ministry has been to bring black culture and black spirituality to the Catholic Church,” Father Norvel told The Josephite Harvest shortly after his election.

He is credited with starting the gospel choir movement in Washington, D.C. and Los Angeles. He opened a Josephite house of spiritual formation in Nigeria, where he served for five years from 1999 to 2004. A number of Josephite priests have been ordained as a result of the Nigerian connection.

Father Norvel said it will be a special challenge to take over the leadership of the Josephite Society at this critical stage. Increasing vocations will be a priority, Father Norvel said. As for the relationship with Nigeria, he said, “We have to go back. I intend to revive the House of Formation and we need to prepare men to go there.”

Father Norvel had served as consultor general for the Josephites from 1983 to 1987 when Josephite Father John Filippelli was superior general. He also has served as president of the Black Catholic Clergy Caucus from 1985 to 1987.