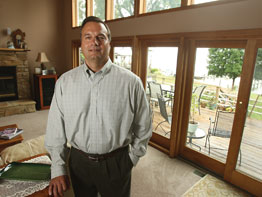 Retirement for Baltimore City’s former high-profile fire chief, William Goodwin, has been by his own account, a “bittersweet” experience.

It’s been nine months of some emptiness and depression but also a time in which his heart has been touched in ways he had never expected.

The death of a city fire recruit in February 2007 and opposition from the fire department unions brought political pressure to bear and most likely led to his retirement, he conceded, even though Baltimore City Mayor Sheila Dixon did not ask him to step down.

The fire department issued a press release touting Chief Goodwin’s accomplishments, including modernizing the department, improving diversity in its ranks and directing the response to the capsizing of a water taxi that killed five people in 2004.

His last day as fire chief, emergency manager and head of Baltimore’s Homeland Security was Dec. 31, 2007, a Monday. On Wednesday, Jan. 2, 2008, a day that otherwise would have found him on the job, enmeshed in all the crises, problems and even tragedies his position usually imposed on him, he wasn’t at work. He was at home, and he wasn’t in uniform. And what he remembers most about that first day of retirement was “the deafening silence.”

Soft spoken, highly articulate and with an easy, gracious manner, Chief Goodwin reflected on his first months of retirement with characteristic candor.

“I just wasn’t prepared for it,” he said. “I had no idea.” When he called his former office with a question about his pension, he was put on hold.

With an extraordinarily impressive resume that includes not only his glittering achievements as a firefighter and leader but a master’s degree from The Johns Hopkins University and a fellowship at Harvard, Chief Goodwin remained hopeful for new opportunities.

Friends and family members told him that “your phone will be ringing off the hook.”

But, he added with a wry chuckle, “It hasn’t rung. One day you’re someone – the next day you’re nothing.”

That’s been the downside of his so-far brief retirement, but the upside is putting in a welcome appearance with the encouragement of his wife, Anita, his daughters, Kimberly Goodwin-Maigetter and Monica Zittle, and his three grandchildren, particularly a grandson and namesake, 8-year-old Will Maigetter, who goes to St. Clare School, Essex, and who lives just jogging distance away from the former chief’s waterfront Essex home.

“I get to spend a lot of time with Will these days,” Chief Goodwin said, “and it’s been a totally unforeseen benefit. It’s taken my heart to a place I didn’t know existed. That and spending more time with Kim and Monica. It’s been a whole new experience for me. It’s been a blessing.”

He cherishes many memories of all his years as a firefighter, although not so much those of the difficult last five years as chief with, perhaps, one exception. As chief, he was involved in the movie “Ladder 49,” a close-to-reality story of the lives of Baltimore firefighters, starring John Travolta and Joaquin Phoenix. Chief Goodwin actually appeared briefly in a couple of scenes and in one poignant moment in which Mr. Travolta shows Mr. Phoenix pictures of his firefighter father and grandfather – the photos are, in fact, those of Chief Goodwin’s father and grandfather.

A graduate of Archbishop Curley High School in Baltimore, Chief Goodwin grew up in Canton (“before Canton was cool”) and was an altar boy at St. Casimir. Although he and his wife are parishioners of St. Ursula, Parkville, where his daughters went to school, he has reconnected with St. Casimir and recently served on the committee to make it a parish school once again.

Not long ago, Chief Goodwin was interviewed by Style magazine and asked to identify his favorite building in Baltimore. Unhesitatingly, he replied, St. Casimir.

“You can see those steeples from anywhere in Canton,” he said, “so you’re never lost, you can always find your way home, in more ways than one.”

His strong Catholic faith and his fond Canton memories are leading Chief Goodwin back home in more ways than one. His initial depression and decompression from one of the toughest jobs around are passing. He realizes it took time and may take a little more time to come to terms with what has been a radical change in his life, but he is already finding the transition smoother and more hopeful.

“It’s been a bittersweet experience, but I’ll always want to do something, and I intend to,” he said, “and I still want to make a difference in someone’s life every day.”