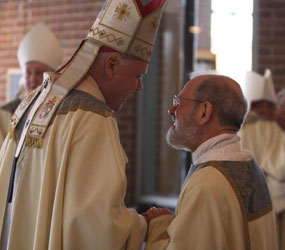 Transitional Deacon Warren Tanghe’s path to the Catholic priesthood may have been long and winding, but the former Anglican priest will be open to all the gifts of the holy spirit as he is ordained June 24 at 6 p.m. in the Basilica of the National Shrine of the Assumption of the Blessed Virgin Mary in Baltimore.

“I prayed before my diaconate that the Lord would give me anything that was lacking in diaconal character,” said Deacon Tanghe, who was a member of the Anglican Church for 37 years. “I prayed that the Lord would renew and refresh those gifts he had already given me for diaconal ministry and that he would pour out upon me in their fullness anything that might be lacking. And that is my prayer going into the priesthood as well.”

Born in Kyoto, Japan, to a Catholic father in the U.S. Army and a mother who was Episcopalian, Deacon Tanghe moved every two to three years. Raised in the Catholic faith as his father fought in Korea, Deacon Tanghe, as the story goes, one day asked too many questions about the mosaics that decorate the Catholic church, so the priest responded, “Get that child out of here!”

He and his mother then began attending an Episcopal church.

A committed Christian in high school, Deacon Tanghe had his heart set on becoming a doctor as he entered Trinity College in Hartford, Conn. While he wasn’t bad at the sciences, the deacon acknowledged, “the things that made my heart sing were the liberal arts, and in particular, I had a knack for history.”

He took a significant number of religion courses as well, and a presentation on the Book of Job and John Henry Newman’s Apologia Pro Vita Sua particularly touched him.

“I thought, science can deal with the mechanics of things, but what is the meaning of a human being?” he said. “And Newman fascinated me because his religious vision was very different from the Episcopalian congregation in which I was raised.”

He visited two churches in New York, a Catholic church where the priest didn’t have much time for him, and an Anglo-Catholic parish, one of the Episcopal parishes that emphasize the Catholic heritage of the Anglican tradition. This priest had a lot of time for him.

Already confirmed as an Episcopalian, Deacon Tanghe was ordained as a deacon in the Anglican Church at age 24 in June of 1973, and as a priest in December of 1973.

He gained valuable pastoral experience while serving at St. Michael’s Episcopal Church in Bristol, Rhode Island, and two years later was off to study at Keble University, Oxford. He had the opportunity to be taken under the wing of the 100th archbishop of Canterbury, then retired Michael Ramsey. Deacon Tanghe then wound up as chaplain of Pembroke College in Cambridge, where he served for three years and was a member of the faculty of divinity.

When he returned to the U.S., he served at a small congregation in Long Island, N.Y., followed by Louisville, Ky., and then the Church of Our Saviour in Georgia. He also served as secretary and vice president of Forward In Faith, North America.

He was then called to serve as chaplain of the All Saints convent in Catonsville, and journeyed with the sisters there as they were received into the Catholic Church. He sent a letter renouncing the ministry of the Episcopalian Church in August 2009.

Deacon Tanghe, along with the sisters, was received into the Catholic Church by Archbishop Edwin F. O’Brien in a Sept. 3, 2009 ceremony. Five days later, Deacon Tanghe began serving at St. John the Evangelist in Severna Park, where he said he has learned much from Father James Proffitt, the pastor, and the congregation.

“I’ve received more than I’ve given here,” he said. “The support of the people in this congregation is incredible.”

Although differences between the two churches exist, such as the significantly larger size of the Catholic parishes (the largest Anglican church in the U.S. has 4,000 members and St. John has 3,400 families), Deacon Tanghe is familiar with the discipline of priestly life and knows he can draw on his skill set.

Deacon Tanghe has applied for the faculties for the Anglican Use liturgy so he may on occasion be able to celebrate Mass for the sisters at the convent, for example.

He said that during his ordination to the diaconate, he had “an overwhelming sense of the spirit’s presence and powerful working.”

“My job is to be open to the gift of the spirit and to the priestly character,” he said. “I just want to be as open as I can to whatever he will give on the 24th.”