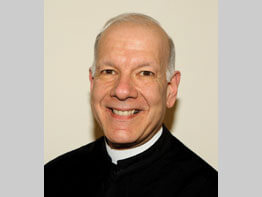 Pallottine Father Salvatore C. Furnari says he had always heard God calling him to the priesthood.

For decades, though, he didn’t heed the call.

“I always knew that God wanted me to be a priest, but I always felt that I wasn’t worthy enough,” said Father Furnari, 61. “But I realized, especially through friends of mine, that no one’s ever really worthy, but that Jesus calls you where you are at the time. And that’s exactly what I did. I accepted God’s gift to the priesthood.”

He did so only after working in advertising more than 15 years, and now, Father Furnari has been named pastor of St. Leo, Little Italy.

How does a former ad man put his experience to work as a parish priest?

“Basically, the whole premise behind advertising is to open up people’s minds and then by way of doing that, open their hearts to an idea,” he said. “And being a priest, that idea is Christ, and opening their hearts and their minds would be through the Eucharist. What is there in this life that’s more important than that?”

In 2005, Father Furnari was ordained by Cardinal William H. Keeler at St. Jude Shrine, Baltimore, then assigned to Our Lady of Pompeii in the Williamsburg section of Brooklyn, N.Y. Months later, he joined St. Leo, as associate pastor.

Born and raised in New York City, Father Furnari attended Catholic schools there, then went to Hunter College of the City University of New York.

For much of his advertising career, he worked for Gulf & Western Inc., before entering Holy Apostles Seminary in Cromwell, Conn., in 1998. He studied theology at Catholic University of America and received his master of divinity degree in 2004.