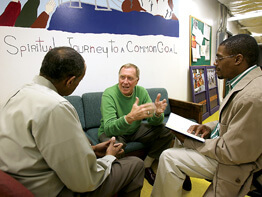 As an actor, Seamus Dockery played roles in television, film and on stage, including a bit part in “The Exorcist” and in AARP commercials. Before retiring, Mr. Dockery prepared students to appear on stage when he was an acting and directing professor at Loyola College in Maryland, Baltimore.

A new role he recently assumed isn’t in front of the camera or under hot stage lights, but behind the scenes as a volunteer mentor at Christopher Place Employment Academy, Baltimore. The academy has a residential component which supports addiction recovery and helps formerly homeless men become productive members of the community.

Mr. Dockery was cast appropriately, according to William K. Macsherry, Baltimore regional director of Ignatian Lay Volunteer Corps, a program that places people age 50 and older into 10-month volunteer opportunities to serve those in need 20 hours per week. Mr. Macsherry was the speaker at a St. Ignatius, Baltimore, Sunday Mass Mr. Dockery attended.

“It’s an ideal match based on his terrific background and his sensitivity to the addiction recovery program,” said Mr. Macsherry.

Mr. Dockery was inspired to do more than volunteer at St. Ignatius, where he serves on the parish council, assists with Loaves & Fishes on Sunday evenings distributing food on the street, is a member of the prayer group and participates in the book club. That Sunday he admitted that he was tapped on the shoulder for this ministry.

“I think this is exactly what he was looking for,” said Mr. Macsherry. “He knew right from the start what type of field he wanted to get into, and we’re very, very pleased there is such an opportunity for him to utilize his background and his interests.”

With his smooth radio voice that served him well as an actor, the 70 year old plans to use and personalize the 12-step structure of Alcoholics Anonymous as he addresses the groups at Christopher Place. He has designed several recovery exercises for the men, such as asking them to write letters to people to whom they’ve lied, cheated, crossed and been unfaithful.

“Making amends is part of the recovery process for addicts,” said Mr. Dockery, speaking with bright eyes behind wire-rimmed glasses. “An addict also has to develop an attitude of gratitude. If a recovering person doesn’t have gratitude, you’re in trouble.” Another exercise includes asking them to write a list of what they are thankful for. “‘Here are two legal pads and 15 minutes,’ I tell them, ‘write until your fingers fall off.’”

The Brooklyn, N.Y., native immediately levels with these men, indicating that it gives him credibility. With six years behind him as a recovering alcoholic, Mr. Dockery thinks he is “one of the lucky ones. This deepens my commitment to my own recovery,” he said. “No one gets sober alone.”