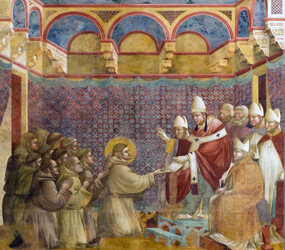 VATICAN CITY – At first glance, the scholarly Pope Benedict XVI – sometimes dubbed “the pope of reason” – might seem an unlikely devotee of St. Francis of Assisi, the mystic friar of simple faith.

Yet the German pope has found in St. Francis something that goes beyond the saint’s popular image as the patron of peace, the environment and animals. For him, St. Francis offers a model of radical conversion to Christ.

An earlier pontiff, Pope Innocent III, approved the founding of St. Francis’ religious order 800 years ago, and in mid-April Franciscans from all over the world converged on the Italian hill town of Assisi to celebrate the anniversary.

Assisi has gained a reputation as a place for spiritual seekers of every stripe, and its interreligious gatherings in recent years have drawn criticism from some conservative quarters of the church.

Pope Benedict, however, has lauded the “spirit of Assisi” and its emphasis on dialogue and interfaith bridge-building.

At the same time, he has encouraged Franciscans to highlight the fact that St. Francis’ spiritual path began with a life-changing encounter with Christ. Today’s pilgrims need to understand that connection, he said.

“It’s not enough that they admire Francis: Through him they should be able to encounter Christ,” the pope said during a visit to Assisi in 2007.

It’s instructive to see how Pope Benedict views the life of St. Francis. During the same visit, the pope described the young Francis as a “king of partying” who grew disillusioned with the clothes, music and relatively easy life afforded him by his economic status in the 13th century.

In his first 25 years, the pope said, Francis was mainly out for fun and entertainment in life. He was vain and placed a lot of emphasis on image.

The pope’s portrait of the young Francis was not a flattering one: a self-absorbed man who wandered the towns of central Italy looking for material pleasure. Then a change came, as tradition recounts, triggered by small encounters with the poor and the sick.

The pope compared Francis’ conversion to that of St. Paul. Although Francis’ journey was more gradual, he said, it was just as intense as St. Paul being knocked off his horse and blinded by the light of Christ.

Francis began to have visions and to withdraw in prayerful solitude. He told friends he was about to be married – to a bride called “Lady Poverty.” He encountered a leper on the road and, after first drawing away in disgust, went toward him and embraced him. He came to Rome, prayed at the tomb of St. Peter and gave away all his money.

His conversion is sometimes pinpointed to the moment when, praying before a crucifix, he heard God’s voice telling him to “repair my house.” He then wandered the hills trying to rebuild churches, but this was far from an idyllic lifestyle: Francis was mocked as a madman, pelted with stones, locked up at times by his angry father and often went hungry and cold.

It was in 1208 that Francis clearly understood his vocation, while listening to the Gospel account of Christ’s instructions to his disciples: to renounce all material things and to roam the land, calling people to penance and peace. He experienced these words of Scripture as a personal calling.

By now, ridicule among the local people was turning to respect, and Francis began to attract followers. He wrote the first “rule,” a collection of Gospel principles on which his order would be founded; the exact form of that text is unknown today, but it was approved orally by Pope Innocent III in 1209 – despite reported resistance by the Roman Curia to such a radical mode of religious life.

This year’s commemoration in Assisi marks the approval of the first rule of St. Francis, and it will no doubt be followed by others in a kind of “rolling anniversary” of Franciscan milestones, including Francis’ death in 1226. He was canonized only two years after he died, and has become the patron saint of Italy, of the Italian lay movement Catholic Action and many other groups, as well as of animals and the environment.

For Pope Benedict, St. Francis is relevant today not only because of his eco-friendly image. The key to his vocation was the figure of Christ, the pope said, and if seen strictly through the lens of social activism the saint suffers a “type of mutilation.”

That St. Francis suffered the stigmata – the wounds of Christ – was an eloquent sign of this, he said.

“He fell in love with Christ. The wounds of the crucified one wounded his heart before leaving their marks on his body on Mount La Verna. He could truly say with Paul: ‘It is no longer I who live, but Christ who lives in me,’” the pope said.

It wouldn’t be surprising to see the figure of St. Francis appear in Pope Benedict’s upcoming social encyclical, which is expected to treat the questions of charity and the Christian response to economic injustice. As the pope has said, St. Francis’s radical rejection of material comfort was part of his “quest for Christ in the faces of the poor.”