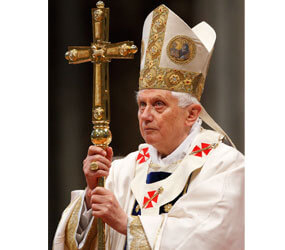 VATICAN CITY – Over the last few months, Pope Benedict XVI has opened a wider dialogue on the subject of environmental protection, and in the process put a sharper focus on an issue that’s become central to his pontificate.

It’s increasingly clear that the “green” label slapped onto Pope Benedict after he installed solar panels at the Vatican and joined a reforestation project in Europe was not the whole story. Now the pope is defining which shade of green – in moral arguments that are not always popular.

The pope began weighing in on environmental themes in 2006. His strong defense of the Amazon’s fragile ecology, his appeals for safe water and his warnings on pollution’s burden on the poor all received general acclamation.

When he approved the installation of solar panels on several Vatican buildings and funded tree-planting in Hungary, the Vatican drew praise for trying to become the world’s first carbon-neutral state.

But lately, the pope’s words on ecology have raised eyebrows and even some objections.

In a speech Jan. 11 to the diplomatic corps accredited to the Vatican, the pope extended the discussion of “human ecology” to same-sex marriage.

“Creatures differ from one another and can be protected, or endangered, in different ways, as we know from daily experience. One such attack comes from laws or proposals which, in the name of fighting discrimination, strike at the biological basis of the difference between the sexes,” he said.

That prompted protests from homosexual activists, including the head of an Italian gay organization, who said the pope’s linkage of gay marriage and ecological irresponsibility was “almost comical.”

Pope Benedict, however, was not trying to score a cheap political point. His argument touched on what might be called the leitmotif of his pontificate: that man is not God, and that man’s actions should correspond to God’s plan – or, as he phrased it to the diplomats, to “the structure willed by the Creator.”

This is a long-held opinion of the German pontiff. In 2004, in a major Vatican doctrinal document on the relationship of men and women, then-Cardinal Joseph Ratzinger said the “obscuring of the difference or duality of the sexes” was part of a misguided effort to free the human being from biological conditioning.

Addressing the diplomats, the pope said he was thinking of legislative initiatives in countries in Europe, North America and South America. Three days earlier, the Parliament in heavily Catholic Portugal was the latest to pass a law that would legalize same-sex marriage.

In the same speech, the pope underlined that protecting the environment makes no sense unless it begins with protecting human life, including the life of the unborn. Here, too, the pope was emphasizing that the church’s “green” philosophy always puts the human being at the center, precisely because humans are made in God’s image.

Critics might argue that the pope was hijacking environmental issues to push the church’s agenda on the usual topics of abortion and homosexuality. But in fact, the pope’s analysis of morality and ecology went in several other directions, too, challenging conventional policies.

One of his strongest points to the audience of diplomats – and one that received relatively little coverage in mainstream media – was that the protection of creation demands a re-allocation of resources away from military spending and the development of nuclear weapons.

It echoed an appeal he made for disarmament in his World Peace Day message Jan. 1, which was dedicated to the environment. In that text, the pope said the continued existence of nuclear weapons “threatens the life of the planet and the ongoing integral development of the present generation and of generations yet to come.”

Likewise, the pope probed the link between war and ecological damage. He noted that many current conflicts around the world arose from a struggle for natural resources, and in turn inflict immense harm on the environment.

He looked at the connection between environmental destruction and migration, and pointed to the drug trade in places like Afghanistan, where agriculture is largely dedicated to the production of narcotics. “If we want peace, we need to preserve creation by rechanneling these activities,” he said.

In short, the pope’s analysis is not a simple one, nor is it easily categorized. His environmental “position” touches on climate change (he urged an international agreement, warning that the future of some island nations is at stake) and the global economic crisis (which he blames in part on the selfish activities of the investment industry).

He sees the ecological crisis as part of a wider moral crisis, and the common denominator is what he calls a “self-centered and materialistic way of thinking which fails to acknowledge the limitations inherent in every creature.”

With that as a starting point, the pope’s continuing catechesis of ecology is likely to keep grabbing attention and ruffling feathers in coming months.