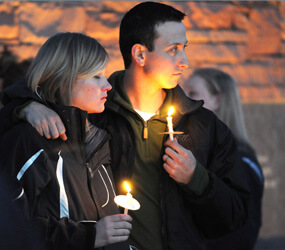 ENGLEWOOD, Colo. – Ten years after the shootings at Columbine High School, the massacre is still fresh in Connie Michalik’s mind.

Her son, Richard Castaldo, was a junior at the school on April 20, 1999, when students Eric Harris and Dylan Klebold killed a dozen students and a teacher and wounded more than 20 other people in a rampage that ended when they took their own lives.

Mr. Castaldo was eating lunch with friend Rachel Scott on the school lawn when a shooter he saw out of the corner of his eye shot Ms. Scott four times, killing her instantly, and pumped eight bullets into him, leaving him paralyzed from the chest down.

“Every single day I think about it,” said Ms. Michalik, a homemaker and longtime parishioner of St. Louis Church in the Denver suburb of Englewood.

Her son’s limited mobility is a daily reminder, but his injuries haven’t stopped him from building an independent life and following his dreams for the future.

Now 27, Mr. Castaldo lives alone in Hollywood where he’s pursuing a career as a sound engineer. A musician and a gamer, a year ago he earned the equivalent of an associate’s degree in sound engineering. He works retail to pay the bills, but stays involved with sound projects and is currently doing postproduction audio on a film.

“Not a day goes by that it (Columbine) doesn’t cross my mind. Sometimes I’ll hear something, a reference to it, like on ‘The Sopranos,’ and it completely destroys me. It hits me so hard,” his mother told the Denver Catholic Register, newspaper of the Denver Archdiocese.

“Now all these articles are popping up in Newsweek or in the newspaper,” she continued. “I’ll not be ready and they’ll hit me. It’s like someone just stabbed me in the heart. (Columbine is) now part of pop culture. It’s just with you.”

After arriving in town April 18, Mr. Castaldo told the Register he thought he would attend one or more of the memorial services scheduled for the 10th anniversary of the shootings, but he didn’t have firm plans set.

“Last year I didn’t do anything that special,” he said. “I don’t usually do a whole lot. I usually just try to think about the people that died. I think about what happened.”

Maintaining occasional contact with some of his former classmates – “mainly through Facebook” – Mr. Castaldo noted that the students have moved forward with their lives and so has he.

He credits the initial outpouring of community support and the empathy he still receives when people learn his injuries happened as a result of Columbine for contributing to his healing.

“It’s very meaningful to me,” he said. “Having peoples’ prayers and concerns for me and the other victims. … It just helps. People are pretty supportive.”

The New York-based Columbus Citizens Foundation funded his sound-engineering education. Denver’s Freedom Service Dogs was going to provide him with a new assist dog while he was in town to replace the one that died recently.

A year after the shootings, Mr. Castaldo expressed no anger or hatred toward the shooters. Today, there is still no trace of resentment.

“The people that shot me, I think they really were teased,” he said, referring to reports that the perpetrators were bullied. “I don’t think that’s an excuse, but I think it fed into their anger. It doesn’t justify what they did.

“I was teased in school, too,” he added. “It’s not a Christian thing to do. I think people should be more aware of that. If they see people being teased, hopefully, it will be taken seriously because I think it’s a problem.”

Gentle, quiet and with a mop of dark, curly hair, Mr. Castaldo reflected on whether society has learned anything in the decade since the deadliest shooting at an American high school.

“Obviously we haven’t learned anything at all because it keeps happening,” he said. “That’s not a good sign.”

“It makes me sad that here it is 10 years later and there are still shootings,” she said, mentioning an attack at Platte Canyon High School in Bailey, Colo., in September 2006; the shooting at an Amish school in Pennsylvania the following month; and the worst school shooting in U.S. history, at Virginia Tech in Blacksburg, Va., in April 2007, which left 33 students and faculty, including the gunman, dead.

In 2002 Mr. Castaldo participated in the Michael Moore documentary “Bowling for Columbine,” which explores the role of violence and guns in the U.S. and in the Columbine massacre.

“I’m not necessarily totally in favor of gun control, but I think some basic stuff would be very helpful,” he said, adding that current measures, including background checks, “don’t seem to be working too well – crazy people are getting guns too easily.”

Additionally, Mr. Castaldo recommended that people make it a point to be aware of others’ emotions, particularly anger, sadness or depression, and reach out to them.

“I think, basically, it comes down to treating people decently,” he said simply. “What I think people should learn is that … people need to have respect for other people. That makes sense.”