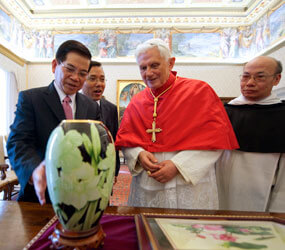 The encounter Dec. 11 was the first time a president of communist Vietnam met with the pope and high-ranking Vatican officials.

Pope Benedict and President Triet spent 40 minutes in closed-door talks discussing “cooperation between church and state” and the current international situation, particularly “the commitment of Vietnam and the Holy See in the multilateral field,” said a Vatican statement.

The Vatican was pleased with the visit as it marked “a significant stage in the progress of bilateral relations with Vietnam,” the statement said, adding that it hoped “outstanding questions may be resolved as soon as possible.”

The pope and president greeted each other very warmly at the outset of the meeting, and the atmosphere in the papal library was friendly and positive.

President Triet had told an Italian newspaper earlier that his government wanted to establish diplomatic ties with the Vatican.

“We are working to open diplomatic relations with the Vatican,” he said in an interview with Corriere della Sera published Dec. 8.

Cardinal Jean Baptiste Pham Minh Man of Ho Chi Minh City told the Asian church news agency UCA News Dec. 10 that many people would like to see the two countries establish ties soon. He said there have been goodwill gestures recently between the two sides, which have created the right conditions for closer relations.

The Vatican and Vietnam have not had diplomatic relations since 1975 when the country was reunified under communist rule. At that time, the government severed ties with the Vatican and confiscated church property.

Despite the lack of formal diplomatic relations, Vatican diplomats make annual visits to Vietnam to discuss church-state relations and specific questions related to the appointment of bishops, seminary enrollment and the functioning of Catholic institutions.

The Vatican and Vietnam established a formal committee to discuss diplomatic relations after Prime Minister Nguyen Tan Dung met Pope Benedict in January 2007. That meeting marked the first time a prime minister from Vietnam’s communist government met the pope and top officials from the Vatican’s Secretariat of State.

There are continued restrictions on Catholic life in the country and the Vietnamese government continues to insist on approving candidates for bishop before the pope names them officially.

UCA News reported Dec. 10 that the Vietnamese government has slowly relaxed some of its religious restrictions since Prime Minster Dung’s visit to the Vatican in 2007. The news agency said local church and government officials have begun to have constructive talks concerning religious and social issues.

Local church officials have been hoping that the establishment of formal diplomatic relations will translate into more freedom for the local church.

Cardinal Man told the Rome-based missionary news agency AsiaNews Dec. 10 that his diocese has been able to rebuild and run more than 190 facilities such as kindergartens, vocational schools and charities and that the diocese’s major seminary has 180 seminarians and 300 priestly candidates.

The people’s attitude toward the church has shifted from hostility to its being seen as “an organization that could serve the people and help in the nation’s development,” Cardinal Man said.

However, government force and intimidation are still levied against some religious groups, AsiaNews said. Church property has been seized and religious and laypeople have been threatened or attacked for not following government orders, it added.

In September, government authorities in central Vietnam erected a wall around a small school that had been built by local Catholics after it was used by the local parish for catechetical purposes. Police used force to prevent Catholics from leading and attending catechism classes at the building.

Bishop Paul Bui Van Doc of My Tho said church leaders “need concrete instructions from the Holy See when being confronted with sensitive issues in which a tiny mistake would cause enormous damages to the church and country,” AsiaNews reported Dec. 10.

When the Vatican intervened last February to discourage church-led protests on the grounds of the former apostolic nunciature in Hanoi, the government returned the building to the Catholic Church.

Cardinal Man told the Vatican news agency Fides Dec. 11 that he hoped the Vietnamese president’s meeting with the pope would result in greater harmony among all people in Vietnam. The church hopes that Vietnam may become “a new human community where truth, love, justice and peace reign,” he said.

According to a Vietnam News Agency report, Vietnam has six state-recognized religions and more than 20 million believers, half of whom are Buddhists. Catholics comprise the next-largest group at more than 6 million people, just slightly more than 7 percent of the population.