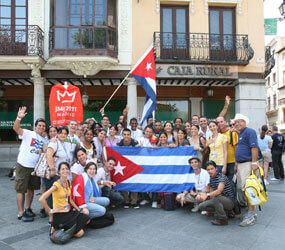 Their national flag waved overhead; some draped flags around their shoulders. The delegation members – including several nuns, priests and married couples – were using their lunchtime to talk over their experiences as part of the Days in the Diocese, an immersion experience that precedes World Youth Day.

A group of Italians passed by and chanted “Cuba, Cuba, Cuba,” – an interruption received with smiles and counter-chants from the Cubans.

The young people told Catholic News Service they received monetary support from the Cuban Catholic Church and that they traveled with Bishop Alvaro Beyra Luarca of Bayamo, who oversees the youth apostolate in the island nation.

“The church made it easy for us to travel,” said Rafael Bertot, who works as a driver for Bishop Beyra. “The church paid for our travels because we are too poor.”

He added that an Argentine nun working in Cuba did most of the preparations with the young people who came to Spain.

Some of the Cuban youth attended World Youth Day events in Rome in 2000 and Toronto in 2002.

Bertot, wearing a Cuban flag and holding a half-eaten ham sandwich, spoke of the spiritual dimensions to World Youth Day.

“We see and feel and live this event; Jesus Christ is present in the many groups,” he said. “We are the young Catholic Church, and Pope Benedict (XVI) has told us to be firm in the faith,” he said, referring to this year’s World Youth Day theme.

Josebel Solano, one of the Cuban pilgrims, said Spanish hospitality made him feel very welcome.

“This really conveys a sense of universal church and that our brotherhood is a reality and not just an idea,” he said.